We saw something remarkable last week. And it could be a signal that the market is due for a much-needed stock rebound this week!

Specifically, on Friday, the S&P 500 dropped into a bear market, defined by a 20% drop off recent highs. Then, in the final hour of trading, stocks bounced. Not only did they rally out of a bear market, but the S&P 500 closed the day in the green!

And we think smart money is taking notice. As a result, they could be gearing up to buy the dip in a big way this week. Indeed, as I write this on Sunday evening, stock market futures are up strongly.

Are we in for a stock rebound?

We think it’s entirely possible. And if stocks do rally, one group that’s positioned to soar is the biotech sector.

The recent stock market selloff has been violent, but it has also been inequitable. That is, while all stocks have been hit hard, some have been hit much harder than others.

Biotech stocks have been among the hardest hit.

Often, biotech firms are pre-revenue companies whose value is tied up in future cash flows and profits from in-development drugs. That makes them particularly vulnerable to rising interest rates. As rates go up, the net present value of those future cash flows gets diluted.

Unsurprisingly, biotech stocks have been crushed in 2022. Year to date, the SPDR S&P Biotech ETF (NYSEArca:XBI) is down about 40%.

But according to the fundamentals, this selloff is way overdone.

A recent Bloomberg screen of biotech stocks found that 86 companies are trading for less than their cash value. That’s a jaw-dropping number. Indeed, over the past 25 years, biotech selloffs have usually bottomed out with about 20 stocks trading below cash value. We’re at more than 4X that number today. 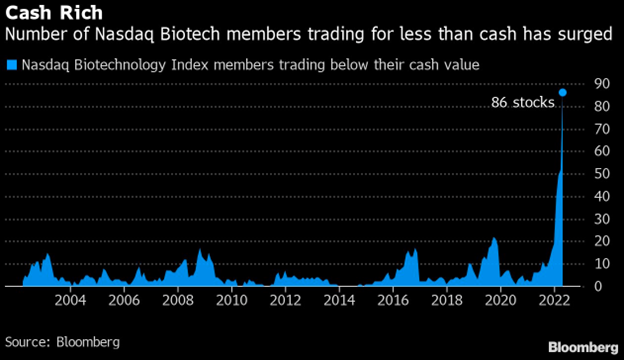 Fundamentally speaking, then, biotech stocks are more undervalued today than they’ve been in the past 25 years. And it’s by a wide margin.

That’s a bullish setup for a big biotech stock rebound over the next few weeks, months and years!

The Technical Picture Is Very Bullish

The biotech stock breakout thesis doesn’t end with the fundamentals. The technical picture is just as bullish.

First, we have the COVID-19 support line. The biotech ETF is running into support levels established by its pandemic lows from March 2020. It’s showing some pretty strong support here, which is a very bullish sign that this could be a bottom.

Second, we have the post-2008 uptrend. The ETF is also running into the support line of a 10-year-plus uptrend established during the 2008 financial crisis. This support level largely coincides with that of March 2020, so the ETF has double mega-support at current levels.

Third, we have rare oversold conditions. The biotech ETF has been hit so violently that its Relative Strength Index has plunged into oversold territory below 30. This has only happened three times before. Each time it did, it marked a near-term bottom in the ETF that turned into a big multi-month stock rebound. 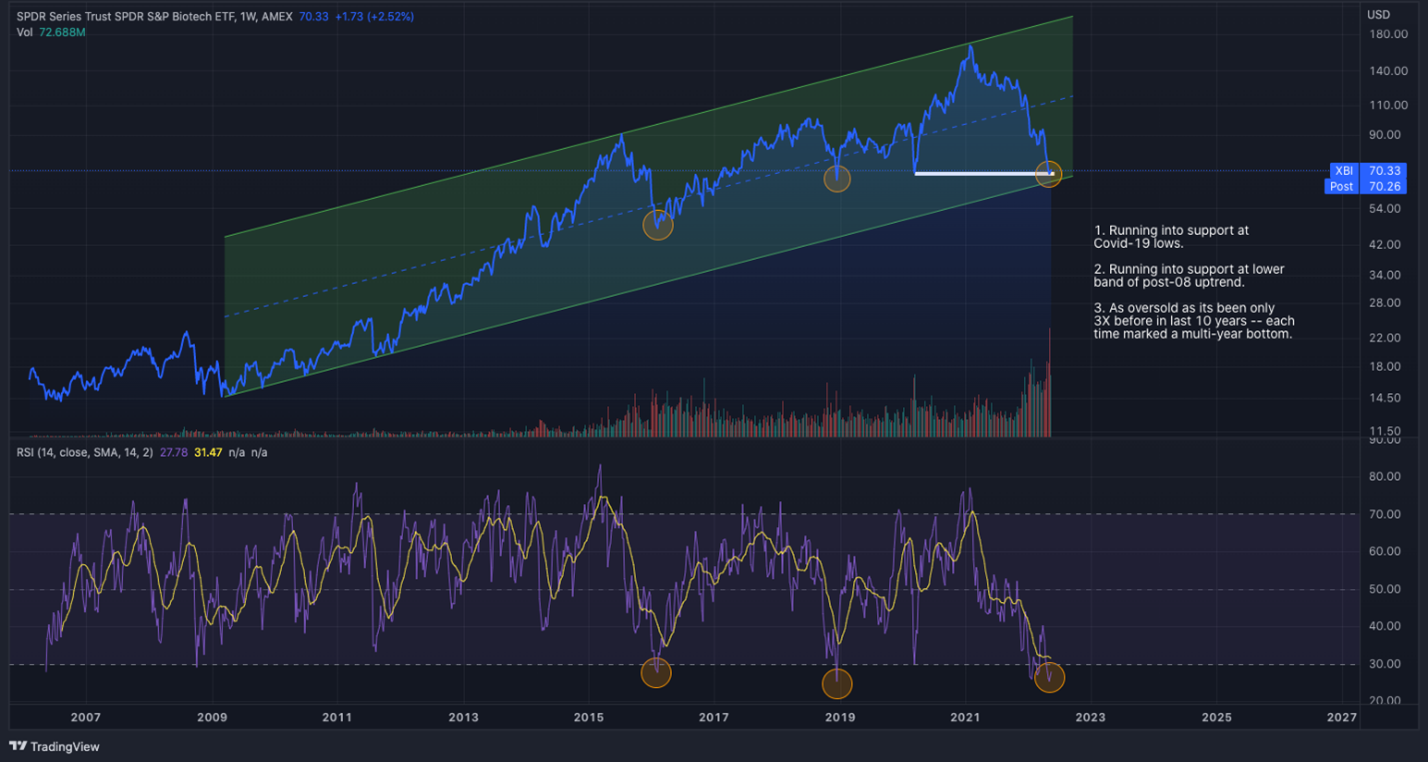 Overall, then, the technical picture for biotech stocks truly could not get any more bullish right now.

COVID lows, post-2008 uptrend support and bullishly oversold conditions are all converging at the same time. This provides a ton of technical firepower for biotech stocks to stage an enormous breakout.

And we have the perfect stock to play this breakout!

The Final Word on a Biotech Stock Rebound

The market has successfully averted a bear market twice in May. That’s bullish, and we think it sets things up for a nice stock rebound here.

If so, our analysis strongly suggests that biotech stocks are ready to break out in a big way.

Leading that rally will be one small $3 stock that we believe is the single best biotech investment of our generation.

This is a company that reminds us of an early-stage Microsoft (Nasdaq:MSFT). What Microsoft did for personal productivity over the past 20 years, this company will do for biotechnology over the next 20.

Indeed, it will entirely change the biotech game.

We believe this stock will triple over the next 12 months alone and rise by 10X-plus in the next five years. Long-term, this is a stock that could make millionaires out of early investors.

And its huge rally could start right now.

So… what’re you waiting for? Find out more about the best biotech investment opportunity of our era.

The post ðŸ“ˆ Two Charts Show That Biotech Is in for a Stock Rebound appeared first on InvestorPlace.

Loopring Price Predictions: Where Will the GameStop NFT Wallet Take the LRC Crypto?