A Big Short Squeeze Is Brewing for Stocks, and We’re Bullish

TSLA Is a Must-Buy Ahead of the Aug. 17 Tesla Stock Split

This article is excerpted from Tom Yeung’s Moonshot Investor newsletter. To make sure you don’t miss any of Tom’s potential 100x picks, subscribe to his mailing list here.

It’s been an odd week for stock investors.

On the one hand, value stocks are surging. My long-time office Christmas Party pick Peabody Energy (NYSE:BTU) is up another 50% this year, making my $2 entry price look like a rounding error. (BTU trades at $17 today). Ordinarily, you would expect the Benjamin Graham fan club to be running victory laps around growth investors.

But many growth stocks are also doing well. Asana (NYSE:ASAN) is up 50%, and even Chinese carmaker Nio (NYSE:NIO) has rebounded 20% from its recent lows.

The past few weeks of Q4 earnings have shown diverging fortunes, even among firms in exactly the same industry. Lyft (NASDAQ:LYFT) has seen shares rise almost 10%, while Uber (NYSE:UBER) is down 7%.

That’s because markets are moving beyond “pandemic vs. reopening stocks.” After two years of macro-led swings, stock-picking is finally back in vogue.

The return of company-specific investing means that my Insider Track strategy is back in a big way:

The list keeps going — it turns out that when companies are facing diverging fortunes, it doesn’t matter what industry you’re in. A whole host of insiders are willing to use their knowledge for additional gain.

That means it doesn’t matter whether you’re a value investor or a growth one… an equities analyst or a crypto-manic. If insiders at a company are buying shares, you can be sure Moonshot will be reading every little clue they publish to figure out why.

I’ve long avoided recommending Appian (NASDAQ:APPN), a low-code automation platform based in McLean, Virginia. Though revenues have grown 18% over the past nine months, the company had all the indicators of a troubled growth stock.

When marketing costs grow 40% faster than revenues, it’s often a sign that the firm is running out of customers (Companies in “hockey-stick” growth should typically see marketing costs decline relative to sales). APPN’s rising R&D costs also suggest over-customization of products in an effort to land new clients.

But earlier this month, the calculus changed:

Abdiel is such a good market timer that Tipranks names it the No. 42 fund of the 86,640 the site tracks.

Now that the fund is tip-toeing back into the stock, APPN deserves a second look.

As you start to comb through Appian’s financials, one thing stands out:

The list of potential suitors runs long. The tech firm has built out its platform for more than two decades and remains on Gartner’s Customers’ Choice list for low-code application platforms. SAP (NYSE:SAP), Microsoft (NASDAQ:MSFT) and Accenture (NYSE:ACN) could all realistically make a bid.

Appian would also win. Plugging a winning product into an experienced sales team could help the firm thrive.

For those looking for “spicier” return potential, Cryomass Technologies (OTCMKTS:CRYM) offers one such path.

Last June, CryoCann USA, a marijuana refining company, went public via a back-door merger with shell company Adina Gold. CRYM would eventually peak at 64 cents in October before falling back to 27 cents as the hype wore off.

But in the past week, I’ve become bullish on the stock. And so have the insiders:

That’s because Cryomass has been quietly improving its machines, which process cannabis within minutes of harvest. By drying plants with liquid nitrogen, Cryomass preserves more of the THC-rich trichomes found in cannabis than traditional drying methods.

For marijuana producers, it’s an obvious win. Unlike tobacco (which is still largely consumed through cigarettes), less than half of cannabis is smoked in flower form, according to industry surveys. The rest is consumed through increasingly discreet methods, including vapes, edibles and concentrates.

In these use-cases, 90% of a marijuana’s plant’s weight has no value. A grower only needs the THC of the plant — the psychoactive compound — and the rest is so much compost.

Cryomass’s management seems to believe that their new machine works. The company’s latest model was allegedly tested in January, though the results have not yet been publicly announced. But if insiders are buying in a big way, they probably know something about their latest refinement system that they’re not yet sharing.

Mining companies are particularly interesting as Insider Track bets because of the sector’s built-in information asymmetries. When geologists have been digging for gold all their lives, they can often identify a high-potential mine long before the official drillhole results are released.

And that grey area is where insider buying happens. Because a geologist’s spider-sense is technically not “material nonpublic information,” they’re free to trade on the hunch, so long as they’re doing it before receiving official drillhole results.

Other mining executives have similarly used this loophole to their advantage. Executives at Osisko Mining (OTCMKTS:OBNNF) walked away with a literal windfall last month when drillholes at their aptly named Windfall Gold Deposit revealed one of the highest-grade projects in Canada. And regular readers may recall I mentioned Rise Gold (NASDAQ:RISE) last week, a firm that saw heavy insider buying before The Atlantic published a piece about its California expansion.

Allegiant Gold already has a heavy insider presence. Seeing its CEO double down on his bet suggests that there’s even more gold in them hills.

But not all work-from-home companies are so lucky. Firms from Zoom (NASDAQ:ZM) to vaccine maker Moderna (NASDAQ:MRNA) have lost billions in market capitalization over the past several months. Yet insiders aren’t moving in. 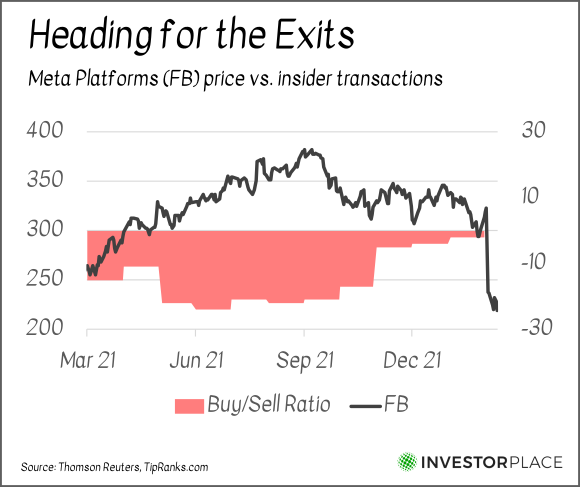 Despite its recent 30% decline, Facebook shares are still unattractive to corporate executives. Perhaps top brass realizes that Metaverse ambitions could take years to play out. Or just as likely, maybe Facebook is finally falling behind its competitors.

If you’ve ever run into one, you know the tell-tale signs of a die-hard macroeconomic trader. These souls are glued to political news and use terms like “narrow money” and “carry trade” to explain what they do all day.

These traders thrive on making big bets on “Systematic Risk.” Will the Turkish Lira fall another 50% this year? Or will crude oil hit $100? They’ll often gladly share their opinion, even if you never asked for it.

The difference is more important than your college finance professor let on. If you made a bet on a handful of ecommerce firms in 2000 (systematic risk), you would have lost virtually everything when all but 34 collapsed. On the other hand, those concentrating their bets on 1-800 Contacts and Amazon (NASDAQ:AMZN) (unsystematic risk) would have thrived.

Today, the stock market is finally diverging from the “pandemic vs. reopening” paradigm. And as systematic risk becomes more important than unsystematic risk once again, you can expect the top stock-pickers to truly shine.

The post 3 Moonshot Stocks For 2022 appeared first on InvestorPlace.

Lucid Is the Worthy Tesla Challenger Investors Have Been Waiting For

Now Is Not the Time to Lose Interest in Pinterest Stock