3 Moonshot Stocks Insiders Are Buying. What Do They Know?
Advertisement

This article is excerpted from Tom Yeung’s Moonshot Investor newsletter. To make sure you don’t miss any of Tom’s potential 100x picks, subscribe to his mailing list here.

Are executives of high-potential small-cap tech firms buying shares of their beaten-down stocks?

He has a point.

We have war in Eastern Europe…

All these well-founded fears have sent shares of companies like Matterport (NASDAQ:MTTR) and Joby Aviation (NYSE:JOBY) down 75% or more from their all-time highs. Surely insiders would sense an opportunity?

Instead, most buying has come from somewhere else within the tech world:

The past month has seen a flurry of buying activity in the sector. And for level-headed investors, it’s signaling that it’s finally time to buy the dip.

If you’ve never invested in biotech before, you’re in for a treat. It’s one of the few sectors where 10x returns are the norm, regardless of the economic climate.

Consider Pharmasset, a biotech research firm that went public in 2007 at $9. For most high-tech firms, such timing would have left them dead on arrival.

Not so for biotechs,

Four years later, Pharmasset would be acquired by Gilead Sciences (NASDAQ:GILD) for $137/share — a handsome 1,420% return. The combined pharma group would eventually bring Hepatitis C drug SOVALDI to market, a blockbuster therapy that helped hundreds of thousands manage the chronic disease. So much for the 2008 financial crisis!

There is, however, one downside:

You need to be patient for biotechs to pay off.

Clinical trials typically take 5 to 7 years to complete, and investors often wait years to hear any meaningful news at all. Even Pharmasset investors were forced to wait four long years during the financial crisis.

Biotech is also a volatile sector if you’re investing as a basket. Since the start of 2022, the SPDR S&P Biotech ETF (NYSEARCA:XBI) has underperformed the tech-heavy Nasdaq Composite (IXIC) by 8%. 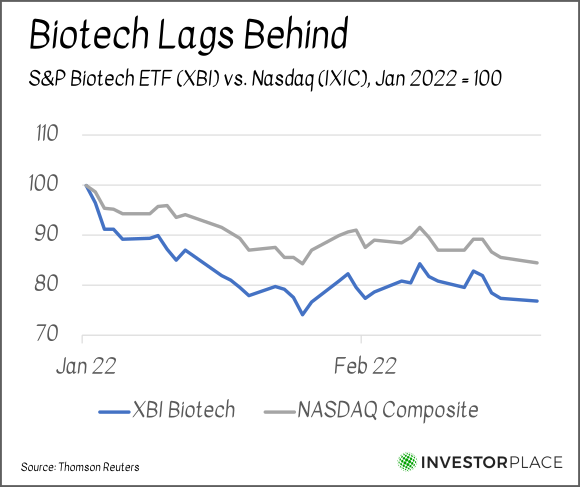 That means you need to be selective in the companies you buy; ETFs simply aren’t good enough. And three firms have recently shown heavy insider purchasing worthy of outsized investment.

…And that makes Inotiv (NASDAQ:NOTV) my top pick for the week.

Inotiv is a mid-market contract research organization (CRO) that provides research services to other biotechs. If you’ve discovered a new cancer-beating drug, Inotiv is the team you call to make sure it won’t kill the patient too.

The CRO industry has been rapidly consolidating. Rival Charles River Laboratories (NYSE:CRL) counted no fewer than four major acquisitions in 2021; Inotiv has done five since FY21.

These deals have driven profits up across the board. In Q1, Inotiv reported a 12% EBITDA margin — twice as high as its 2019 level. As the firm gains scale, management believes it can deliver EBITDA margins in the 18 to 22% range.

That makes the recent sell-off a buying opportunity. Inotiv’s shares are still down 60% from their November peak, giving investors a window to buy into this acquisitive firm.

Ordinarily, IPOs are primetime for insiders to cash out.

“Our findings are that loss of ILK sensitizes breast cancer to SRC/YES1 inhibitors and that this exposes a therapeutic vulnerability in breast cancer,” said lead researcher Dr. Valerie Brunton, “representing a potential avenue for clinical development.”

Shares rose 18% on the news, proving yet again that many corporate executives have zero problems with acting on their insights.

Fortunately, there’s still time to buy. Biotech shares often lag news about preclinical trials, especially when they’re done outside the U.S. (In Nuvectis’ case, researchers performed the tests in the U.K.). And if NVCT’s team has indeed discovered a new pathway inhibitor, you can be sure that insiders will have at least one more laugh.

Investors seeking a more stable biotech firm should consider Cardiovascular Systems (NASDAQ:CSII), a company where insiders are buying on valuation.

CSII operates in the slower-moving world of medical device production. These companies already generate revenue, so they’re easier to value from a traditional standpoint. Analysts currently have a $27 price target on Cardiovascular Systems, a 42% upside.

Yet insiders seem to know something that Wall Street doesn’t. And I suspect it’s this: doctors are now clearing their backlog of delayable surgeries.

That’s great news for companies like Cardiovascular Systems, a firm that’s seen revenues shrink 8% in the past year.

“We continue to believe the current trend is temporary and that many of these procedures will be regained as the Omicron surge declines… and patients return to hospitals and clinics for long-overdue interventions,” CEO Scott Ward noted in the Q2 earnings call on Feb. 3. “It is difficult to predict the exact timing, but we fully expect a backlog of cases to gradually flow through our accounts at some point after this latest wave recedes.”

With shares of CSII trading close to their all-time lows, it’s not hard to see why insiders are snapping up shares today.

Meanwhile, SPACs have been falling to earth. The Defiance Next Gen SPAC Derived ETF (NYSEARCA:SPAK) has lost more than half its value in the past 12 months.

Sponsors are also pulling out. Last week, “SPAC King” Chamath Palihapitiya stepped down as chairman of Virgin Galactic (NYSE:SPCE). EV SPAC Faraday Future (NASDAQ:FFIE) is also seeing a shakeup of its board.

It’s “another sign of the bad times that have hit the market for blank-check funds, noted Andrew Ross Sorkin and others at the New York Times. “At least 22 blank-check mergers have been called off since the middle of 2021.”

Healthcare SPACs have been particularly hard hit. Clover Health (NASDAQ:CLOV) now trades at $2, 93% below its all-time high. Talkspace (NASDAQ:TALK) is at $1.50.

Much of the issue boils down to the absurdly high valuations investors previously placed on these companies. As Clover Health found out the hard way, healthcare insurance is a surprisingly competitive space.

But the industry has also been slow to embrace telehealth — an area where healthcare SPACs congregate. As Covid-19 restrictions continue to lift, investors can expect more pain for these firms before a potential recovery.

The Risks of Biotech Investing

“The study did not meet its primary endpoint of non-inferiority in CVA,” the announcement dryly read, “even though the majority of KSI-301-treated patients achieved durable visual gains,”

In other words, the drug performed worse than Regeneron’s (NASDAQ:REGN) current Eylea treatment.

But these risks are also precisely why biotech offers such outsized alpha relative to other sectors. Most institutional investors can’t wait 5 to 7 years for Moonshot winners to even things out, leaving the sector relatively undervalued.

So if you’re a patient investor, remember this. Between 2011 and 2021, the SPDR S&P Biotech ETF outperformed the tech-heavy Nasdaq Composite by a 1.5-to-1 ratio. And if that’s not a great reason to buy today’s dip, I’m not sure what is.

The post 3 Moonshot Stocks Insiders Are Buying. What Do They Know? appeared first on InvestorPlace.