3 Stocks to Buy While Markets Deal With an Enemy Fed

A Big Short Squeeze Is Brewing for Stocks, and We’re Bullish

TSLA Is a Must-Buy Ahead of the Aug. 17 Tesla Stock Split

In spite of the fear from the Federal Reserve meeting minutes, Wall Street eked out a mixed score Wednesday. Fear as the CBOE Volatility Index (VIX) also fell more than 5%. While it might be a bit premature, I would guess that the bulls are trying to regain their footing. For the last few weeks, investors have been shy about trusting their decisions. That’s why we see equities fall on great reports. As a results, we have a slew of great stocks to buy on extreme dips.

Today we will present three that have just released their earnings and markets hated them. All three candidates share the same thing in common and that’s strong growth. The negative reactions to their earnings were as if the businesses had shrunk. Quiet the opposite because not only did they grow, but they did it with flare. I would consider these stocks to buy as hyper-growth companies. Sadly, this comes with a price and that is extreme stock moves.

On good days they rally ferociously, and on bad days they just crash. All three have similar characteristics to Upstart (NASDAQ:UPST), so you can imagine the rest. Earlier I noted investors are shy about buying with conviction. That’s not because of having a crisis in the financial metrics, so it’s a crisis of courage. The profit-and-loss statements are predominantly strong and the economy is white hot. That’s why the Fed is looking to cool it down.

There are a slew of headline worries serious enough to infuse short-term doubt. The prospects of war with Russia is pretty serious and would definitely cause harm to the indices if it happens. I would bet against that outcome, since governments resources are at their limits from fighting a common enemy: Covid-19. The next biggest source of fear is the potential of having a combative Fed.

While the European Central Bank is still full speed ahead with its QE, the Fed will end its in March. They even had an emergency meeting about it this Monday. Some members are squawking that they want to be aggressive. Meanwhile, Fed Chair Jerome Powell has not portrayed the same tone, yet. He tried that in late 2018 and Wall Street threw a fit and crashed. As a result, the Fed had to restart its QE that is now coming to an end.

QE or not, companies are too strong to call for a stock market collapse. As long as that is the case, then dips are opportunities to find stocks to buy. But there must be rules for that, and mine revolve around quality. I insist on having great financial metrics, in tandem with strong support levels on the charts. I also would prefer that they don’t have a close earnings report date. This leaves only the macro-economic as an extrinsic risk.

The three stocks to buy this week’s weakness are:

RBLX stock fell 26% after it reported its earnings for fiscal Q4 of 2021. Before we address why the selling happened, let me recount their actual results. Remember that the goal of being in business is to grow the business. It sounds stupid stating it as such, but this concept escapes headline writers these days.

RBLX grew sales 83% over last year. Yes, you read that right they almost doubled the company in a year. This is after an 80% increase over 2020 and 56% increase over 2019. Clearly they are doing an astounding job growing, even better than Amazon (NASDAQ:AMZN) did. They did this while having a +$122 million in cash from their operations. So they don’t need to borrow to exist. Bookings rose by 20% and daily average users also grew by more than 30%. Moreover, the average hours spent online also grew by 28%.

So far, there is hardly a reason there in its business that warrants selling it down 26%. They even suggested that January sales will also be up 55% to last year, so the momentum continues. However, God forbid they miss an earnings estimate. Firstly, “earnings” is not a relevant metric to hyper-growth companies like this. You just can’t deliver this explosive growth by pinching pennies. Secondly, they improved the earnings to last year. Besides, the earnings per share (EPS) were only -25 cents per share while the genius estimators were looking for -16 cents.

So instead of structuring a smarter headline, investors sold it in panic on this gem: “Roblox shares are trading lower after the company reported worse-than-expected Q4 EPS results.” Smart money should instead look into the details and pick up a few cheap equities like this reject. Here’s my version: RBLX almost doubled its business, and they did it with better EPS than last year to boot. 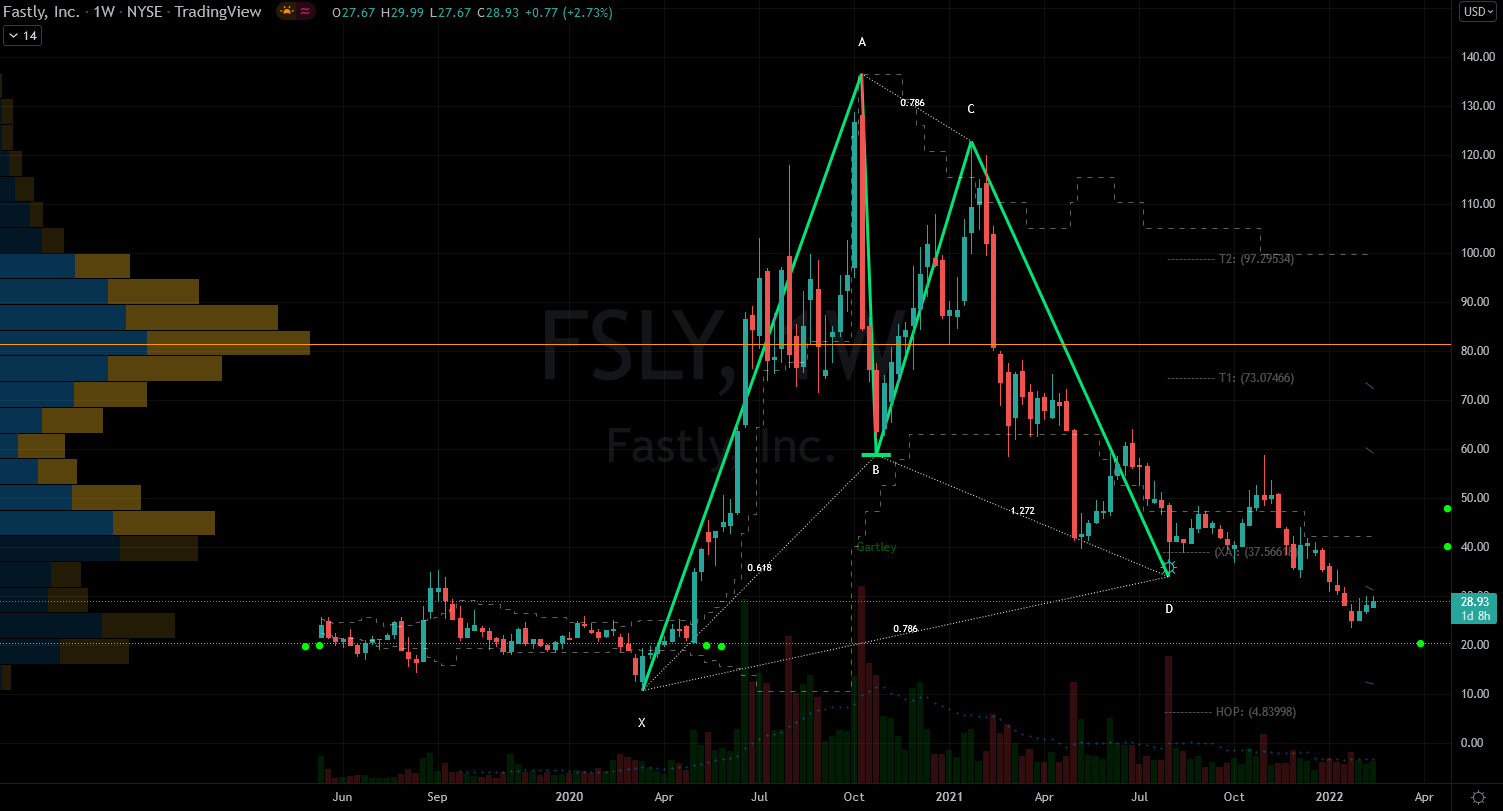 Fastly management reported earnings last night and the stock crashed 28% on the headline. Investors interpreted the scorecard as terrible, but most often it’s all about expectations. The headlines I read did not specify a reason, but hinted at “guidance” as disappointing. So let’s dissect each line item to get a clearer picture of the risk from the report.

FSLY beat the analyst estimate on the earnings front and improved it to last year. Therefore, profitability was not the worry last night. The company also beat the estimates in sales with a total of $98 million. Incidentally this was an 18% increase over last year. Well I am at an impasse because I disagree with the reaction with these “beats” line items. Therefore and since there are no flagrant fundamental reasons for the selling, I can go to my charts.

The technicals have rarely failed me especially when I need a bias-free tie-breaker opinion. Gross margins have deteriorated a little but since they remain above 50%, I will give them a pass. The recent market correction bottomed on Jan. 24 and some on the 28th. That day FSLY stock marked its low down 82% from last year’s high. It had also closed the gap it left behind when it rallied out of the pandemic breakout in 2020.

So, when a stock price falls back to a neckline this pivotal, it tends to find support. Last night’s dip, plowed through that level and went to its IPO range. It is also worth noting that $21 was a pandemic battle zone. Those were days when the whole world was off. Hot war zones like these lows are where buyers step up. Smart investors normally nibble a bit and leave plenty of room for error. This strategy should be a viable course of action for all three stocks today. 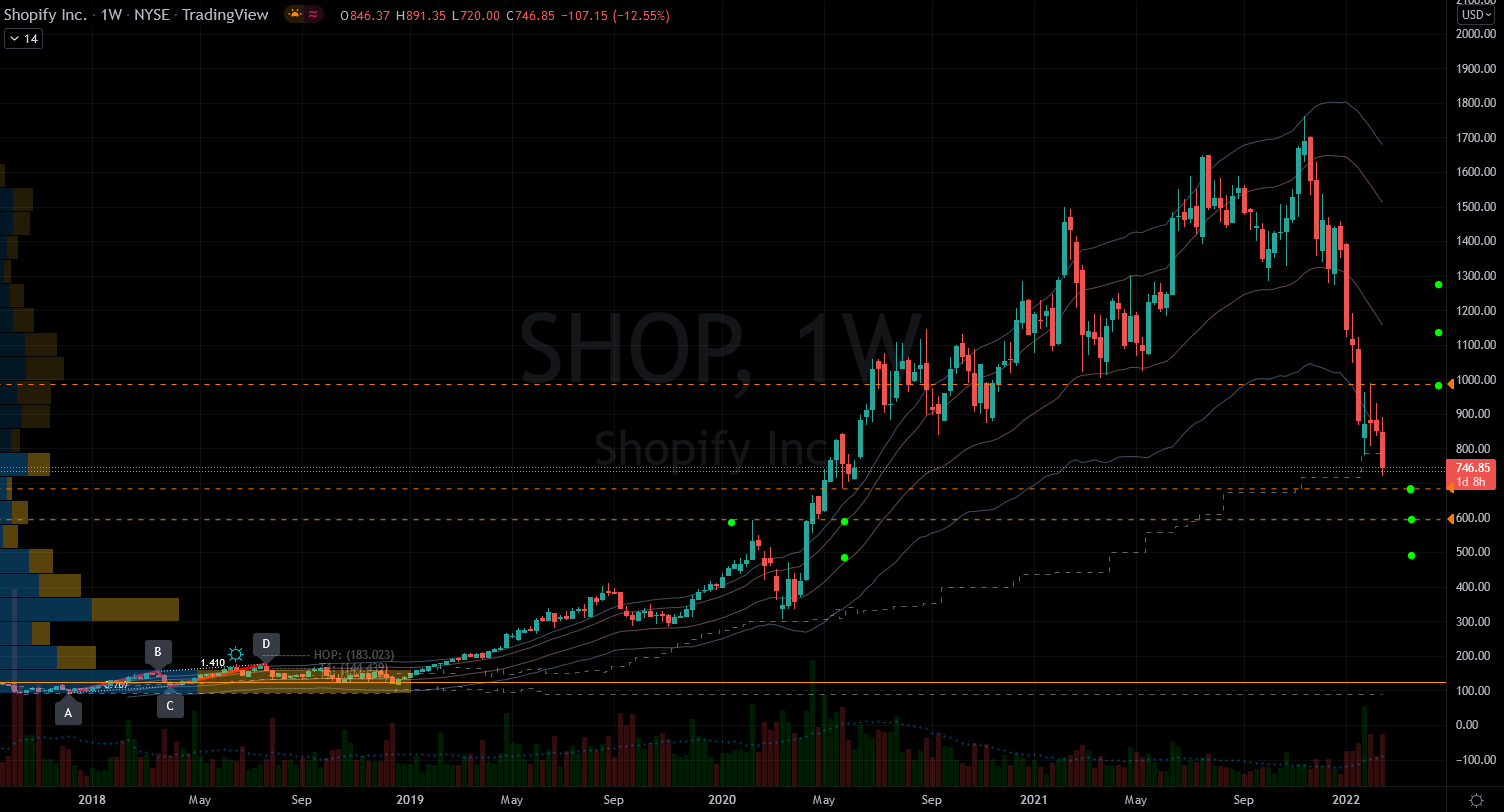 Shopify has been a great success story out of Canada. The company’s clients love it as it empowers small businesses to act big fairly quickly. Wednesday’s negative reaction to their earnings report was extreme. SHOP stock fell 16% during a flat overall tape on Wall Street. Clearly investors did not like what they saw, so let’s investigate.

The synopsis of the results use the word “miss” frequently, so I can understand there were disappointments. However there is one segment that was a giant win that went too quietly. It is not good to miss analyst earnings and sales estimates by 14% and 18% respectively. But if the goal is to grow the company efforts overall, Shopify did a fantastic job again. Management grew as sales by 41% year-over-year.

To put the growth rate in perspective, consider their 2018 yearly sales were just over $1 billion. This past quarter alone they delivered $1.4 billion. It is unfair to call it a failure and should be one of the stocks to buy on dips. Since investors are acting this erratically, I should remain humble with my opinion and leave room for error. Technically, it has support but the downside momentum is strong. Therefore, the selling could persist for two more days from the earnings reaction. And hopefully by then the indices in general would also be quieter.

The post 3 Stocks to Buy While Markets Deal With an Enemy Fed appeared first on InvestorPlace.

The Time for QuantumScape to Strike is Right Now