4 Bitcoin Miners to Buy for a Reversal Rally

Bitcoin miners have been in a correction mode with the recent decline in Bitcoin (BTC-USD). However, it seems that the worst of the correction might be behind. In the last day, Bitcoin has been mostly trading between $44,000 and $45,000.

For investors bullish on the point that Bitcoin is likely to remain in a long-term uptrend, it’s a good time to buy Bitcoin miners. Some of the biggest Bitcoin mining companies have ambitious growth plans for 2022. Hash rate capacity is likely to witness multi-fold growth, and this will translate into revenue and EBITDA (earnings before interest, taxation, depreciation and amortization) upside.

An important point to note here is that cryptocurrency adoption continues to increase. In January 2021, there were 106 million crypto holders globally. The number swelled to 295 million as of December 2021. Crypto.com expects that the number of cryptocurrency holders will increase to one billion by December 2022.

With a limited supply capped at 21 million, Bitcoin is likely to trend higher as adoption increases. While altcoins might provide multi-fold returns, Bitcoin is like a blue-chip stock in the cryptocurrency world. Portfolios will continue to hold Bitcoin. Institutional adoption has also been acceleration and is likely to support the price action on the upside.

Therefore, let’s look at four Bitcoin miners that are positioned for strong growth through 2022. With robust financial flexibility, these Bitcoin miners have growth visibility even beyond the current year:

MARA stock is probably the most undervalued name among Bitcoin miners. In November 2021, the stock had surged to highs of $83.45. However, with Bitcoin trending lower, the stock trades at $27.88 as of opening on Feb. 10.

Assuming a scenario where Bitcoin recovers to $70,000 levels, MARA stock can potentially re-test highs. Therefore, there is a case for multi-fold returns from current levels.

It’s also worth noting that the company is on a high-growth trajectory. For Q3 2021, Marathon reported revenue growth of 76% on a year-on-year basis to $51.7 million. For the same period, the company increased its hash rate to 2.7EH/s.

To put things into perspective, Marathon expects to mine 66 Bitcoins per day after mid-2022. Even at a Bitcoin price of $45,000, the company is positioned for annualized revenue of $1 billion.

It’s worth mentioning here that Marathon has $623.7 million in cash and equivalents. Additionally, the total liquidity buffer is $1.1 billion considering the Bitcoins held in the balance sheet. With financial flexibility likely to increase significantly in 2022, Marathon will be positioned for the next leg of expansion.

RIOT stock has been in a sharp correction mode. In the last six months, the stock has declined by 47%. If there is a sustained reversal in Bitcoin, the worst of the downside might be over for the stock.

From a growth perspective, Riot expects to increase capacity to 12.8EH/s by Q4 2022. With four-folds jump in capacity, the company is positioned for quarterly revenue in excess of $250 million. Therefore, the annual revenue visibility for Riot and Marathon is likely to be similar once the current expansion is completed.

Last year, Riot Blockchain acquired the largest Bitcoin mining facility in the United States. The facility is likely to have a capacity of 750 MW. With the company looking at vertical integration as a long-term strategy, EBITDA margin is likely to remain attractive.

From a financial perspective, Riot reported net cash of $57.9 million as of September 2021. Further, in Q4 2021, the company raised $600 million in an at-the-market offering. Riot is therefore fully financed for the aggressive expansion plans for 2022.

HUT stock has also been in a correction model like all Bitcoin miners. At a forward price-to-earnings-ratio of 17, the stock looks attractive. If Bitcoin resumes an uptrend, I would not be surprised if the stock doubles in the next six to 12 months.

Therefore, it’s very likely that Hut 8 is positioned for quarterly revenue in excess of $80 million in Q2 2022 and beyond. Furthermore, the company’s contracted capacity as of Q3 2021 was 4.5 EH/s. In other words, revenue growth will sustain beyond Q2 2022.

It’s also worth noting that as of January 2022, the company had reserves of 5,826 Bitcoins. This provides financial flexibility for pursuing further growth opportunities. Hut 8 had 144 MW in terms of power capacity as of 2021. In the current year, the company expects the capacity to increase to 209 MW. This sets stage for sustained growth in Bitcoin mining.

Overall, HUT stock trades at an attractive valuation with the company having growth visibility through 2022. It’s another stock that’s worth considering for a sharp reversal. 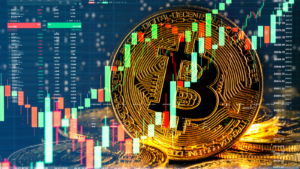 Hive Blockchain is a diversified miner with mining activity in Bitcoin and Ethereum (ETH-USD). The penny stock currently trades at $2.16. That’s down from an all-time high of $5.75. With steady growth in mining activity and some strategic investments, the stock is poised for a reversal rally.

It’s also worth noting that at the end of Q2 2021, the company had 16,000 Bitcoin miners on order. As miners are deployed through 2022, revenue growth is likely to sustain.

Hive Blockchain has also been in a diversification mode through strategic investments. The company has already made investments in the area of decentralized finance and NFTs. As financial flexibility increases with robust mining activity, the company will be positioned for further growth and diversification.

Overall, HIVE stock looks like an interesting bet among penny stocks. If the momentum for Bitcoin sustains in the long-term, the stock can deliver multi-fold returns.

On the date of publication, Faisal Humayun did not hold (either directly or indirectly) any positions in any of the securities mentioned in this article. The opinions expressed in this article are those of the writer, subject to the InvestorPlace.com Publishing Guidelines.

Faisal Humayun is a senior research analyst with 12 years of industry experience in the field of credit research, equity research and financial modelling. Faisal has authored over 1,500 stock specific articles with focus on the technology, energy and commodities sector.

The post 4 Bitcoin Miners to Buy for a Reversal Rally appeared first on InvestorPlace.

Is UBER Stock a Buy After Earnings? Analysts Weigh In on Uber Price Predictions.