7 Stock Price Predictions That Are Actually Worth Listening To

The market has been trading nicely lately, but gapped down on Thursday’s inflation report. After an early rally all but erased the day’s losses, the market went and took out the morning low. With that in mind, let’s look at a few top stock trades going into Friday.

Uber (NYSE:UBER) stock opened higher on the day and rallied on earnings. However, the stock was then rejected by a number of key measures. Among them were the 21-week moving average and the weekly VWAP measure.

On the downside, though, let’s see if it can hold this area. Nearby it finds the 10-day, 21-day and 50-day moving averages, as well as the daily VWAP measure. 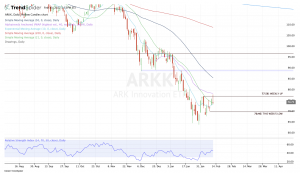 I looked at the Arkk Innovation Fund (NYSEARCA:ARKK) before the open, as the stock was on the verge of going weekly up over $77.56.

It actually did go weekly up, but it stalled with the rest of the market. Now trading down into the 10-day and 21-day moving averages, let’s see if ARKK stock can hold these measures as support.

However, a break below them opens the door to this week’s low down near $70.50. If ARKK stock breaks below $70 and can’t reclaim it, then last week’s low could be in play at $68.20, along with the threat of a weekly-down rotation.

That vulnerability exists next week too, with this week’s low.

Top Stock Trades for Tomorrow No. 3: The QQQ ETF (QQQ) 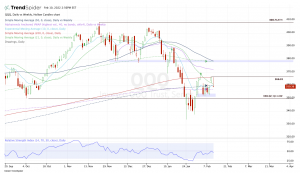 Yesterday I took a look at the S&P 500, and the levels have proven to be quite accurate thus far. We were fortunate to nail the move up to this $457.50 area, and now we’re fading. Like the SPY, the Invesco QQQ ETF (NASDAQ:QQQ) is being rejected from yesterday’s high.

For the latter, it also comes into play near the 200-day moving average.

With the fall, shares are now below a number of key moving averages. If the QQQ loses the weekly VWAP measure, it opens the door down to the $352 to $354 zone. Below that, and the fourth-quarter low is on deck near $350.30. 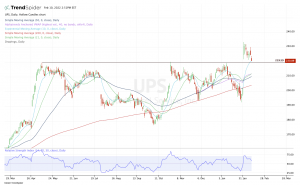 United Parcel Service (NYSE:UPS) is a setup I have been eyeing for more than a week now.

Specifically, I wanted a pullback to the 10-day moving average and the $220 breakout area. Well, it’s here now and the setup is pretty simple.

If it holds and we bounce, the $230-plus area is in play. If it doesn’t and the stock breaks down even further, then the $210 to $213 area is a likely landing spot, given this area’s collection of key short-term moving averages.