7 Short-Term Stocks to Buy for a Quick Profit

What a crazy couple of days it’s been, and throwing earnings into the mix only makes it crazier. We’ve got a full slate of big movers ahead of the weekend, so let’s get a look at a few top stock trades for next week.

We just talked about Block (NYSE:SQ) the other day, as shares were breaking the key $100 level. It was not a great look, but readers had another level on their radar: $83.

That was the perfect level to watch, too, as shares bottomed less than 25 cents from it and roared higher. Now up near $120, Block — formerly known as Square — is up nearly 45% from Thursday’s low.

These moves are so darn tough because they are so big and come at a time when panic and frustration are high.

Now back above the 10-day and 21-day moving averages, I want to see if Square can hold up over these moving averages and the $100 level. A break of the latter technically puts this month’s low back in play.

If it can push higher next week, however, look for a test of the February high and the declining 50-day moving average. 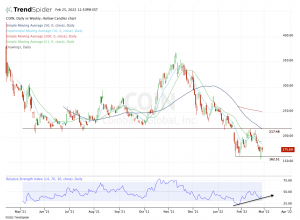 Coinbase (NASDAQ:COIN) also reported earnings, but was a bit more mixed on the session. Shares ended the day Friday down just 1.5%, which is pretty muted for a volatile stock like this.

In any regard, the key levels have really shown themselves lately. On the upside, that level is $217. On the downside, though, it’s $162.50.

The latter ended up holding up as support on Thursday, and we’ve seen a nice spike since. However, Coinbase remains below its 10-day and 21-day moving averages, and thus, it leaves this area vulnerable to another retest.

On the upside, a push through the short-term moving averages opens the door to the declining 50-day — which has been active resistance for many growth stocks lately — as well as the $217 range resistance level. 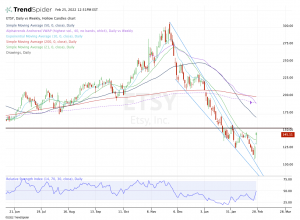 Unlike Coinbase, Etsy (NASDAQ:ETSY) had a nice post-earnings rally, up 16% during Friday’s session.

Earlier this month, Etsy broke out of a sharp falling wedge. From here, I really want to see the 10-day and 21-day moving averages hold as support. Below Friday’s low of $131.25 could put more selling pressure on the stock. 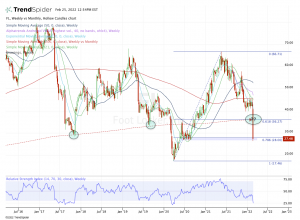 Last but not least, we have the always-volatile Foot Locker (NYSE:FL), which is getting smashed after reporting earnings this morning. Shares were down almost 30% on the day, undercutting a number of key support levels.

If we take the entire range from the March 2020 low to the 2021 high, the 61.8% retracement comes into play at $36.27. What else comes into play there? The 200-month moving average, which has been a notable support and resistance level over the years.

Shares blew right through this zone, which was a huge disappointment for bulls.

Back over $30 and perhaps the stock can make a push back toward the 200-month moving average.

Oil Price Predictions: How Hot Will Crude Oil Get in 2022?

NVDA Stock Under Close Watch as Nvidia Recovers From a Cyberattack