Stocks made new 2022 lows in Friday’s session, as the S&P 500 secured its seventh straight weekly loss and the Dow Jones Industrial Average logged its eighth consecutive weekly drop. With that in mind, let’s start with the latter for our top stock trades.

As you can see on the chart here, the SPDR Dow Jones Industrial Average ETF (NYSEARCA:DIA) is down for its eighth-straight week.

On the upside, I have the $325 to $328 area as key. This was former support earlier in the year and has now failed, while the top of the zone marks the two-week high. Just above that is the declining 10-week moving average.

At some point, yes, I expect a bounce. Even then though, the bulls will need to have some caution on the rallies — remember, this is still a downtrend until proven otherwise.

Eventually, we will get out of this mess, but it seems too early to call the low. That said, if we get more downside in the ensuing days or weeks, keep an eye on the $292 to $300 area. There we find the rising 200-week moving average, the 38.2% retracement, and the pre-Covid highs. 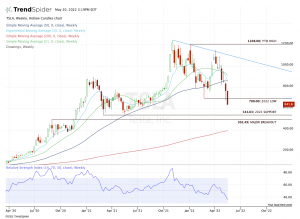 Tesla (NASDAQ:TSLA) got whacked on Friday and fell 14% on the week. It marks Tesla’s fourth straight weekly decline as shares are now down almost 35% in that span.

Below that opens the door to the psychologically relevant $500 level, which is also a major breakout mark.

On the upside, however, it’s simple. Tesla stock needs to reclaim $700. 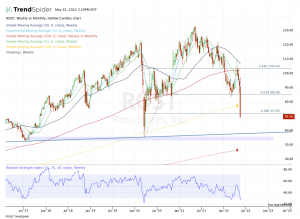 Ross Stores (NASDAQ:ROST) is getting buried on earnings. On the chart, you may notice how key its retracement levels have been, particularly the 38.2% and 61.8% retracements.

It knifed through the latter this week, along with the 100-week moving average and the 78.6% retracement. Unless it can recover the latter — meaning a move above $73 — then Ross Stores stock is tough to buy from a technical analysis perspective.

On the downside, we could see $55 to $60 if the selling pressure doesn’t let up. Either way, I’d rather go with some of the high-quality retail stocks should they reclaim prior support levels vs. jumping into ROST stock right now, which is in no man’s land below $73. 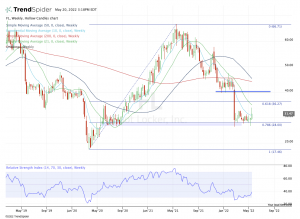 Foot Locker (NYSE:FL) was one of the few surprising gainers on the day, especially given how the stock has traded this year.

However, the stock has done a tremendous job holding the $28 level, something it did in the second quarter of 2020 as well.

I want to see how it does with the 10-week moving average, a measure it’s struggling with right now. If it can clear it and take out this week’s high, keep an eye on $36, which comes into play near the 61.8% retracement and the declining 21-week moving average.