It was another volatile day on Wednesday amid a stretch of many lately. That said, let’s cut to the chase and look at a few top stock trades for Thursday.

Block (NYSE:SQ) — formerly known as Square — is hitting new lows with Wednesday’s decline, now trading at its lowest level since June 2020. The stock is working on its fourth straight monthly decline and ninth straight weekly decline. Shares are down in 15 of the past 17 weeks.

Oof. What a horrible run it’s been.

Block stock tried to find its footing around $100 per share, but it’s now breaking below that mark this week. If it can’t recover this level and push higher, bulls have to be open-minded about more potential downside.

Interestingly, if you drop an anchored VWAP measure all the way back to the first week of trading, SQ stock is running into that area now. I wouldn’t hang my hat on that as an investor necessarily, but it’s worth pointing out. 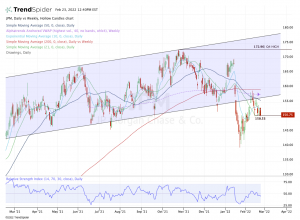 Financials have been trading pretty well vs. the rest of the market, but the charts for JPMorgan (NYSE:JPM) do look a little concerning.

After breaking below its upward channel, the stock was rejected by prior support, as well as the 50-day and 200-day moving averages and the weekly VWAP measure.

Now working with a series of lower highs, the stock is leaning on the $150 level. If it breaks in a meaningful way, it could open the door back down to the January lows around $140.

If JPMorgan can instead reclaim the 10-day and 21-day moving averages, it opens the door up to the 50-day, which has been active resistance. 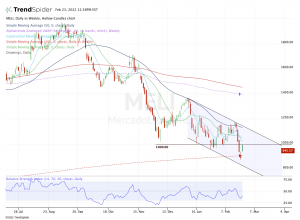 Mercadolibre (NASDAQ:MELI) was up on the day, but only by about 3.7%. It’s better than a sell-the-news earnings reaction, but it’s a meager bounce vs. the decline we’ve seen over the last few months.

The stock is struggling to reclaim the $1,000 level, which it almost did earlier today. For now, though, it’s still holding the 200-week moving average. If it takes that out, then this week’s low is on the table, followed by channel support.

On the upside, however, a move back up through $1,000 could put channel resistance in play, along with the 50-day moving average, which has been active resistance. 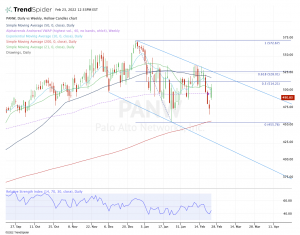 Like ​​Mercadolibre, Palo Alto Networks (NASDAQ:PANW) also struggled on Wednesday thanks to earnings.

Also like Mercadolibre, this is rather disappointing given the decline we’ve seen in the share price lately. In this case, though, shares are down 16% from the high and even at the low of the current decline, shares were “only” down about 20%.

I say “only” like that because for many other growth stocks, the decline was far, far worse.

Despite the morning rally, shares are being rejected by the 10-day and 21-day moving averages and are failing to hold the weekly VWAP measure. Palo Alto stock has now filled the gap from earnings, but if it continues lower and takes out this week’s low, then the 200-day and $455 level are in play.

CEI Stock Alert: What Is Going on With Red-Hot Camber Energy Today?