It doesn’t seem like too many investors want to get long ahead of the holiday weekend, with all the major U.S. indices lower going into the weekend and over the past few days. With that in mind, let’s look at a few top stock trades now.

Here is a weekly chart of Bitcoin (BTC-USD), which has taken a tough hit over the past two weeks (and specifically, the past three days). I am being as objective as possible here with Bitcoin. I’m not long, I’m not short and I don’t have a bias one way or the other.

As I look at the chart, I’m not surprised that Bitcoin couldn’t regain $45,000, which was support toward the end of the year and failed in early January. The market has not been supportive of “risk-on” assets such as cryptocurrencies.

In that scenario, we have an “ABC” type correction underway. The question will then become, what’s the depth of the “C leg?”

On the flip side, however, should Bitcoin firm up and push back through the 10-week moving average, we could be looking at another push to the upside. 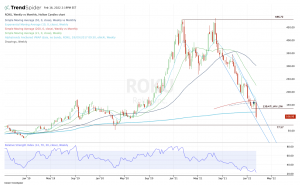 There will be no pushes to the upside this week in Roku (NASDAQ:ROKU), which is getting absolutely crushed after reporting earnings. Shares knifed below the January low and the lifetime VWAP measure near $127.

Now searching for its footing near $100, bulls are hoping to keep the stock from fully plunging off the cliff. If it does, I think we eventually keep our eyes on the $77.50 to $80 area. 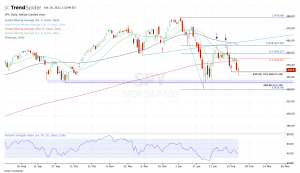 The S&P 500 ETF (NYSEARCA:SPY) isn’t encouraging the bulls, but how many people are looking to get long into a three-day weekend with a potential war about to get going in Eastern Europe?

I write about the S&P every morning because it’s important to know what the key levels are. Friday’s key level on the downside was $435.34, this week’s low.

The big undercut of this level and the bounce back above it makes things interesting now.

However, if we go weekly down below Friday’s low, it puts the $428 to $430 support area in play, along with the Q4 low. Below these levels opens the door to the January low near $420. 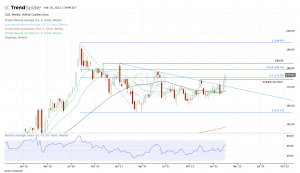 Last but not least, gold has been trading really well lately, as seen in the SPDR Gold Trust ETF (NYSEARCA:GLD).

On the downside, however, a move below the Q4 low puts the 10-week moving average in play and potentially the topside of prior downtrend resistance (blue line).

Have a great and safe three-day weekend and get some rest, traders!

On the date of publication, Bret Kenwell held a painful long position in ROKU. The opinions expressed in this article are those of the writer, subject to the InvestorPlace.com Publishing Guidelines.

Can Stocks Compete with Rising Yields?