The 7 Best Funds to Buy for a Roth IRA

Why Is Embark Technology (EMBK) Stock Up 80% Today?

Based on the overnight action, it looked like stocks were prepped to open far worse than what we experienced on Monday. Now bulls are trying to find their footing as the market trades back toward the January low. With all of that in mind, let’s look at a few top stock trades.

The Ark Innovation ETF (NYSEARCA:ARKK) had an interesting setup this morning. With its gap down, it was set to open below last week’s low and last month’s low.

That provided day traders with a nifty little scalp on the long side before it pulled back on the day and now hovers near the lows again.

From here, we want to see if ARKK stock can find its footing, preferably through some kind of rotation higher, such a daily-up move. Back over $65 is a good start and could put the 10-day and 21-day moving averages in play if this name finds a bid. 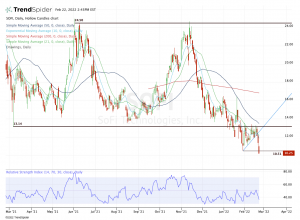 SoFi Technologies (NASDAQ:SOFI) hit new multi-month lows Tuesday on news that it’s making an acquisition in an all-stock deal. The market is in no mood to reward dilutive deals, even if it’s a good pick up.

You can see that in Tuesday’s action, with SoFi stock down almost 10%. Shares have broken down hard over the last two sessions and are now trading below last month’s low.

Below $10.55, however, and it’s akin to catching a falling knife at the moment. 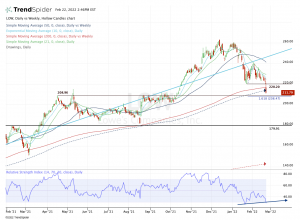 Retail stocks aren’t reacting that well to earnings so far and in particular, Home Depot (NYSE:HD) isn’t reacting well, down about 9% on the day. Now Lowe’s (NYSE:LOW) is under pressure too, down nearly 4% as it reports earnings tomorrow morning.

With Tuesday’s action, it’s ugly. Shares are breaking below last month’s low, as well as the 200-day and 50-week moving averages.

I’m watching this $208 to $210 breakout area, as well as the 161.8% downside extension. In a non-earnings world, it would be easier to “trust” the technicals. But with a binary event on the table, it’s impossible to say.

On a further break to the downside, I’d like to think that Lowe’s is getting the selling out of the way now and that the low-$200s could hold as support. If not, it may eventually put the $180 level in play.

On the upside, though, a rebound back over the 200-day and $220 levels would do wonders for the bulls. However, to be truly out of the woods, the stock has to clear the 10-day and 21-day moving averages as well. 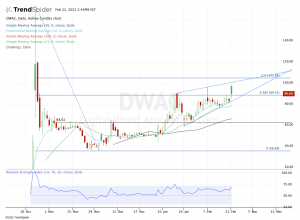 Digital World Acquisition Corp (NASDAQ:DWAC) was up massively in the premarket, but investors are “selling the news” with the launch of its new social media platform.

At the end of Tuesday, shares of DWAC stock finished up more than 10%.

How to Use this Weakness to Your Advantage