In what the mainstream media has warned could be the start of a Russian invasion into Ukraine, the former instead issued a surprising note, indicating that it has begun pulling back some forces from the Ukrainian border. Still, President Joe Biden remains vigilant, noting that an invasion is still possible. If that were to happen, it’s not just cryptos that would suffer but the global economy as well.

Still, after a troubling two years with the coronavirus pandemic, most people across the globe presumably will accept any piece of encouraging news. Adding to the possibility of a diplomatic solution, Russian President Vladimir Putin met with Chancellor Olaf Scholz of Germany. During the discussion, Putin mentioned that some Russian troops will return to their bases. If so, that could significantly help cryptos, which have been choppy recently.

Despite the encouraging outcome, we must remember the old line of the Cold War: “trust, but verify.” In other words, I wouldn’t make extremely strong wagers on cryptos either way — the situation still calls for vigilance.

Much of the reason for caution stems from the curious position that Putin put himself in. No country ever expressed a threat against Russia. And individual countries have a right to join (or not join) NATO. Therefore, Russia threatening Ukraine is its own doing. Craziest of all, Putin’s belligerence has now seen Ukraine more armed than ever. That might go over so well at the Kremlin, meaning cryptos are still at risk.

Indeed, the unnecessarily vituperative course that Russia plowed ahead on has made Ukraine and all other nations ever more justified in seeking an alliance with NATO. So no, now is not the time to let your guard down regarding these cryptos.

As I write this, cryptos are flying higher based on what appears to be declining tensions in eastern Europe. Beyond that this circumstance seems awfully suspicious, we still have significant economic concerns even if we didn’t have to deal with any geopolitical drama. Therefore, I can’t guide a discussion without a framework of caution.

Perhaps predictably, Bitcoin jumped higher when Russia announced that it would be open to a diplomatic solution to the present crisis in Ukraine. Obviously, cooler heads prevailing would be positive for BTC and all other cryptos.

However, it just seems that the west and Russia are going to clash once more; I mean, what could be discussed that hasn’t already been discussed before? Put another way, Russia is the agent selling you a fire insurance policy after setting your house on fire. It’s nuts but here we are.

Now, I’m not here to criticize the Russian people themselves, who are fine folks. However, we must call a spade a spade. If the Kremlin does not want to acknowledge its own role in starting its own troubles, don’t get your hopes too high for cryptos.

Generally among the more stable cryptos, Ethereum has been on quite a ride recently. Just a few days ago, ETH was trading hands below the $3,000 level, a key psychological threshold. Naturally, the second-biggest digital asset by market capitalization slipped when it seemed an armed conflict in Ukraine was imminent.

Keep in mind this was no fake news. Amid the tensions, the U.S. government closed its embassy in Ukraine’s capital city of Kyiv and moved to the country’s western border city of Lviv. I like to think the federal government wouldn’t order such an expensive and alarmist maneuver unless there was real credibility behind the threat.

But with tensions cooling for now, Ethereum traders took the opportunity to drive the coin back above the $3,100 level. So, is it game on for ETH and cryptos?

Personally, I’m not too sure. For one thing, the fact that cryptos slipped in the first place means that even this sector — and not just stocks and commodities — are beholden to what the Russians do. That doesn’t really speak well for an independent and decentralized asset class. More importantly, we may not be out of the diplomatic woods just yet.

It turns out that rebranding isn’t just for publicly traded companies pivoting to the metaverse. Formerly known as Binance Coin, the digital asset is now BNB, which stands for “Build and Build.” According to the team behind BNB, the coin and its ecosystem has evolved beyond Binance and its core business of providing a global exchange for cryptos.

Further, removing the Binance name will provide the rechristened BNB Chain “with more opportunities and freedom to seek innovations.” As well, the blockchain will become a multi-chain network, thus facilitating large-scale applications that include GameFi, SocialFi and the metaverse.

So, if anybody happens to be reading my prior articles about cryptos, please note that I just learned about the name change to BNB. But whatever the case, will the name change matter?

Under the context of the Ukraine crisis, BNB’s shift toward a more utilitarian network could make it vulnerable to downside. You see, amid claims that Russia is pulling back, a cyberattack occurred in Ukraine, impacting certain defense agency websites and major banks.

No one is officially pointing the finger at Russia. However, Russian cyberattacks have always been a key concern, which could certainly impact cryptos and related infrastructure.

Ordinarily, any investment under regulatory scrutiny poses serious challenges for stakeholders. Add in the cryptos element and you’re really playing with fire. Nevertheless, enthusiasm has been particularly strong of late for XRP, the underlying creation of Ripple Labs. Over the trailing five days since the wee hours of Feb. 16, XRP is up nearly 10%.

What’s more, it has really climbed the charts in terms of valuation. As I write this, XRP is the sixth-most valuable virtual currency by market cap. Much of this momentum stems from brewing confidence among bulls that the lawsuit which the Securities and Exchange Commission filed would actually favor Ripple.

But even more critically, a favorable ruling would mean that XRP would be the only digital asset — among a list of over 17,000 cryptos — that commands regulatory clarity. Such a result would be quite the reversal. As you know, the SEC lawsuit made XRP a toxic asset, with exchanges disavowing basically all knowledge.

Nevertheless, you don’t know how these legal issues will play out. Undoubtedly, there’s room for optimism, especially if you have a patient timeline. But I’d be careful either way.

As one of the earlier investors of Cardano, I want to believe that ADA can triumph. However, out of the major cryptos, I have some of the deepest questions for this otherwise intriguing platform. Despite offering multiple fundamental advancements for the blockchain ecosystem, Cardano keeps dropping down the order.

In late summer of last year, Bloomberg announced that ADA was the third-biggest virtual currency by market cap. As of this moment, it’s sitting in seventh place, having been pipped by XRP for the No. 6 slot. If it’s not careful, it could conceivably fall to No. 8.

The issue seems to be that Cardano is not attracting the sentiment that it used to. While there has been much talk about its energy-efficient proof-of-stake protocol, it hasn’t amounted to much since November 2021. Consistently, ADA’s 50-day-moving-average — a common barometer of nearer-term market health — has acted as an upside resistance barrier. 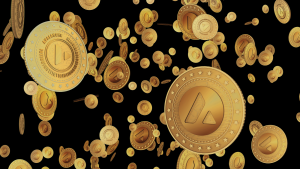 As I write this, Avalanche has had the best near-term performance among cryptos in the top 10 by market cap. Over the trailing seven days, AVAX gained 8% while in the past 24 hours, it shot up nearly 11%. In comparison, Bitcoin only gained less than 1% in the trailing 24 hours and Ethereum performed a bit better at 2.2%.

But can this extraordinary momentum last? On a technical basis, AVAX recently climbed past its 50 DMA (which stands at $84.25). Just as encouragingly, this average is above the 200 DMA, currently sitting at $73.03. By sentiment, Avalanche appears more credible than many other cryptos. However, it’s not quite a green light yet for the digital asset.

Primarily, Russia is still a massive threat, even if it chooses not to invade Ukraine. For instance, Washington and NATO allies are coordinating efforts to defend against digital threats, with the aforementioned cyberattack in Ukraine thought to be conducted by Russia. Therefore, it won’t take much for tensions to escalate again.

If so, having heavy exposure to cryptos would probably not be the wisest choice.

Just sitting outside the top 10, Dogecoin has incurred some choppy trading as investors digest the various geopolitical and economic developments. Still, the key concern from a technical basis is that DOGE — the lovable meme coin — has not printed a price action that would indicate a course reversal to a bullish trajectory.

Despite recent news that Russia is pulling back, Dogecoin still trades below its 50 DMA. As well, this indicator has since October of last year crossed beneath the 200 DMA, suggesting that the dominant trend is bearish. So long as DOGE continues to trade beneath its 50 DMA, traders who don’t really care about holding indefinitely may decide to sell and search for more viable opportunities.

Perhaps most vexing for believers of the canine-inspired coin is that credibility bolstering developments — such as electric vehicle manufacturer Tesla (NASDAQ:TSLA) accepting DOGE as payment for certain merchandise — have not yielded consistently substantive rallies.

To be fair, I’m not entirely sure how geopolitical events will impact meme coins. But until DOGE starts demonstrating a reason to believe in it, this remains a speculative idea.

On the date of publication, Josh Enomoto held a LONG position in BTC, ETH, XRP, ADA and DOGE. The opinions expressed in this article are those of the writer, subject to the InvestorPlace.com Publishing Guidelines.

Sofi Got Its Bank License, But the Stock Is Still in the Dumps