Earnings reports season is winding down. However, there are still a number of household names and closely watched companies slated to report fourth-quarter results next week. These include a marquee electric vehicle maker, several big box retailers and some well-known technology concerns.

In general, fourth-quarter 2021 earnings have been positive. With nearly 85% of companies in the S&P 500 index having now reported their Q4 numbers, 77% have beat earnings per share (EPS) expectations, and 78% have better-than-expected revenues, according to data from FactSet.

However, these facts haven’t prevented stock markets around the world from declining amid the crisis in Ukraine especially with high inflation and the expectation that interest rates are about to rise. Both the S&P 500 and Nasdaq indexes are now officially in correction territory having each fallen more than 10% on the year.

Here are seven companies with earnings reports on the week of February 28.

We’ll get an update next week on how the luxury electric vehicle maker is performing relative to other start-ups in the field. The news should be positive now that the company is in full production of its Lucid Air electric sedan.

With plans to begin producing a second vehicle — the Gravity luxury SUV — in early 2023, analysts remain bullish on LCID stock, with Citigroup (NYSE:C) having upgraded the shares to a “buy” rating and a $57 price target, which is more than double its current price of $26.48 per share.

LCID stock has taken a hit amid broader market weakness and reports that the the U.S. Securities and Exchange Commission (SEC) is investigating the carmaker’s combination with the special purpose acquisition company (SPAC) that took it public last July. Lucid has said that it is cooperating with the investigation. Despite the investigation, Lucid Motors has been impressing with its vehicle. MotorTrend magazine named the Lucid Air its 2022 “Car of the Year.”

Wall Street expects Lucid to report an earnings per share loss of -$0.35 on revenues of $36.74 million for the fourth quarter of 2021.

It’s been a tough haul for Zoom Video Communications and its shareholders. In the past six months, ZM stock has declined 64% to $123.68 a share, including a 33% retrenchment since the start of this year.

The stock has been dragged down along with other high-flying technology and stay-at-home stocks that thrived during the pandemic but are now getting dumped by investors in favor or value and defensive stocks. Zoom Video’s share price is now 73% below its 52-week high of $440 a share.

It’s been a stark reversal for ZM stock, which gained 396% in 2020 at the pandemic’s height. However, there maybe room for some optimism for this company and its future outlook. Despite the pandemic coming to an end, Zoom Video continues to grow.

The company’s revenue was up 71% through three quarters of last year and that growth could continue when it reports Q4 results next week. Analysts are forecasting that Zoom Video will report earnings per share (EPS) of $1.05 on revenues of $1.05 billion.

Despite being the largest cloud-based software company in the world, San Francisco-based Salesforce has not been immune to the market downturn this year.

So far in 2022, CRM stock is down 18% to $207.14. That brings its losses over the past six months to 20%. While not as severe as many other tech stocks, it is still disappointing for shareholders who continue to wait patiently for the company’s shares to breakout in a meaningful way.

Salesforce’s leadership team has been heavily criticized lately for their move towards cryptocurrencies, notably non-fungible tokens (NFTs) that are often referred to as “digital art.” Company founder Marc Benioff has announced plans to launch an NFT cloud” service.

That plan has been met by an employee backlash, with many staff members having signed an internal letter protesting the move and saying it violates the company’s core values. Analysts are calling for Salesforce to report EPS of $0.75 on revenues of $7.24 billion.

Fourth-quarter results from Target will provide us with a snapshot of how consumer spending is holding up amid an inflation rate that is currently at a 40-year high.

TGT stock was a top performer in 2021, however a year-to-date decline of nearly 15% has erased much of the gains seen over the previous 12-months. However, the big box department store chain that is headquartered in Minneapolis, Minnesota is expected to hold up fairly well in the current inflationary environment given its discounted prices and ability to raise prices as needed.

Analysts will be watching the company’s Q4 print to see how same store sales are holding up and also how Target is executing on its online and e-commerce expansion.

Throughout the pandemic, Target sought to move growing numbers of consumers online to purchase items as many of its physical store locations were shuttered by pandemic safety measures. For the fourth quarter of last year, analysts are forecasting that Target will report EPS of $2.86 on revenues of $31.41 billion. 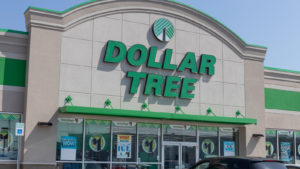 Another discount retailer that analysts will be watching closely next week is Dollar Tree. The Chesapeake, Virginia-based company that operates more than 15,000 retail outlets across the U.S. and Canada is expected to announce EPS of $1.77 on revenues of $7.12 billion.

The company’s sales are expected to get a boost from the rapid rise in consumer prices that has pushed many people to seek out cheaper alternatives available at discount stores such as Dollar Tree.

Owing to the expected boost to its business, DLTR stock has held up better than most securities this year. So far in 2022, Dollar Tree’s share price is down less than 1% at $140.38 per share. However, the stock is up 33% over the past six months.

Any beat in its fourth-quarter results could propel the stock even higher. However, it has not been all smooth sailing. It was recently announced that Dollar Tree Executive Chairman Bob Asser will retire following pressure from activist investor Mantle Ridgel, which wants to replace the entire board of directors.

Another prominent retailer that will enter the earnings spotlight next week is Seattle-based Costco. The membership-driven, big box retailer continues to be a highly respected company, with legendary investor Charlie Munger recently praising the company’s e-commerce strategy and declaring that Costco will be “an absolute titan on the internet.”

That’s especially high praise since Costco, like many retailers, continues to pour resources into its online sales channels.

Yet the praise and admiration has not been enough to help COST stock avoid the market decline this year. Since the start of January, Costco’s share price has fallen 9% to now trade at $518 a share.

However, despite the pullback this year, Costco’s share price remains 43% higher today than where it was in February 2021. That speaks to the continued growth and strength of the company and its successful strategy. Analysts are looking for Costco to report EPS of $2.74 on revenues of $51.29 billion for last year’s fourth quarter.

The week concludes with a Q4 print from semiconductor company Marvell Technology. Like other chip makers and technology stock, MRVL shares have been pulled down this year, dropping 21% since New Year’s Day to $69 a share.

Marvell’s stock has also gotten hit by the ongoing shortage of semiconductors around the world and a general move by investors out of richly valued tech stocks amid a flight to safety in less risky assets such as bonds and gold.

Still, despite the recent decline, Wall Street remains bullish on MRVL stock, with Goldman Sachs (NYSE:GS) upgrading the company’s share price to “buy” from “neutral” and giving it a $95 price target, representing 34% worth of upside potential from current levels.

Many analysts see the current downturn in Marvell’s share price as likely to be temporary and are urging investors to buy the dip. For its fourth-quarter results, analysts are looking for Marvell to report EPS of $0.48 on revenues of $1.55 billion.

On the date of publication, Joel Baglole held a long position in C. The opinions expressed in this article are those of the writer, subject to the InvestorPlace.com Publishing Guidelines.

Joel Baglole has been a business journalist for 20 years. He spent five years as a staff reporter at The Wall Street Journal, and has also written for The Washington Post and Toronto Star newspapers, as well as financial websites such as The Motley Fool and Investopedia.

The post 7 Stocks Reporting Earnings the Week Of February 28 appeared first on InvestorPlace.

3 Commodity Stocks Jumping Ahead of the Weekend