Alibaba (NYSE:BABA) stock is languishing at depressed level, but so are the shares of many of its high-profile tech peers. Still, what specifically is causing BABA stock’s underperformance? The fundamental outlook for the Chinese ecommerce giant is fairly robust. You can see this in the predominantly bullish stances of analysts.

Out of the 22 analysts rating BABA stock, 19 are in the bullish camp and three remain on the sidelines, according to data compiled by TipRanks.

Alibaba is a conglomerate with diverse businesses under its umbrella. Apart from its thriving core ecommerce business, it has a strong presence in Cloud. So what’s ailing this once high-flier? Is a reversal round the corner? And does the valuation look attractive at current levels?

BABA stock hit top gear in mid-2020 after being locked in a broad trading range since the middle of 2017. The stock gap-opened higher on July 6, 2020, as abatement of the Covid-19 pandemic in China triggered an across-the-board rally in Chinese stocks. The stock quickly rallied to a peak of $319.32 on Oct. 27, 2020 only to flounder thereafter.

Regulatory woes and China’s economic softness dragged the stock down from the all-time high and positioned it on a downward trajectory. BABA stock is currently threatening to break below the lower end of the three-year trading range seen between mid-2017 and mid-2020. 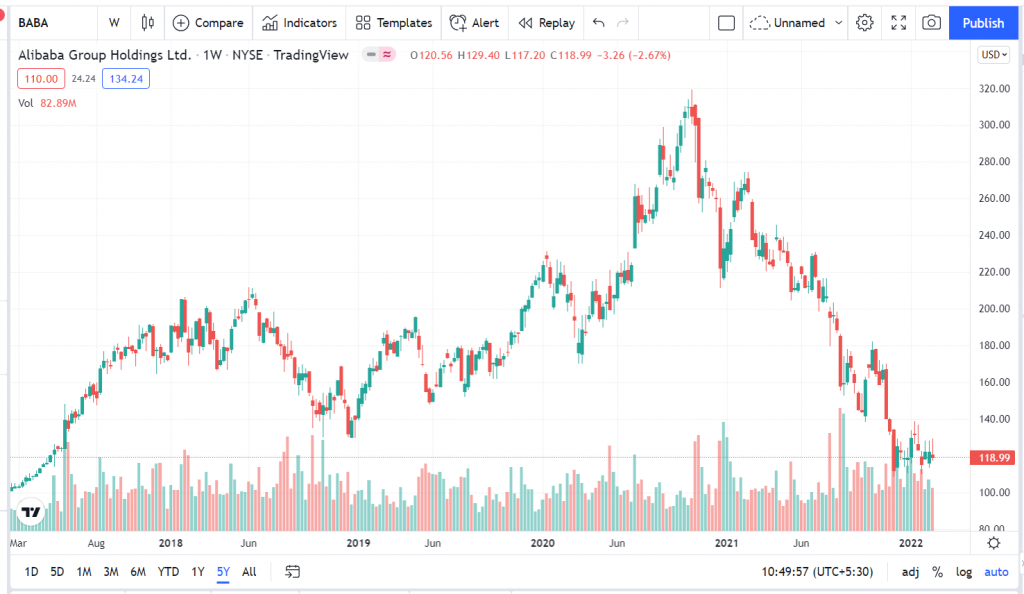 In the September quarter, core commerce accounted for $26.57 billion or 85% of the total revenue of $31.147 billion. Within this segment, the major revenue earner was Customer management revenue (CMR), which contributed $11.13 billion or 36% to the top line.

CMR is the money the company charges merchants on its Taobao and Tmall e-commerce platforms, for services such as marketing.

Notwithstanding the dominant share, CMR revenue rose merely 3% year-over-year in the September quarter, down sharply from the 14% growth in the June quarter.

The “other” China retail commerce segment has been delivering strong growth. In the September quarter, revenue more than doubled to $8.6 billion. The segment includes contribution from direct-sales businesses, including Sun Art, Tmall Supermarket, Freshippo and direct import.

Third-quarter Cloud computing revenue came in at $3.11 billion, or about 10% of the total. Digital media & entertainment and innovation initiatives & others made up 4% and 1%, respectively, of the total revenues.

Overall operating income for the September quarter came in at $2.33 billion. The commerce business collected $3.98 billion in operating income, helping to offset the losses incurred by the remaining segments.

China’s economic growth slowed in the second half of 2021, crippled by power shortage, the domestic real estate crisis and a slowdown in consumptions amid Covid-19 restrictions. Retail sales in the nation grew at an anemic pace of 1.7% year-over-year in December, slowing from the 3.9% increase in November. It also marked the slowest pace of increase since Aug. 2020.

Slowing retail sales do not bode well for Alibaba.

Here’s how the company did in terms of its core commerce business since the first quarter of 2020:

After peaking in the fourth quarter of 2020, commerce revenue growth has been on a downtrend. The slowdown is also a function of increasing competition from smaller domestic rivals.

Apart from the macro challenges, Alibaba is also facing the heat of regulatory clampdown. In late October 2020, Alibaba’s founder and former chairman Jack Ma came out criticizing the communist regime for the inefficiencies in the nation’s financial system. This led to a series of retaliatory actions from the government, which was tantamount to witch-hunting.

Just ahead of the proposed $34 billion initial public offering of its Ant Financial fintech unit, Alibaba was forced to abandon its ambitious listing plans.

In April 2021, China’s State Administration for Market Regulation imposed a record fine of $2.75 billion on Alibaba for its anticompetitive practices. Subsequently, the government asked Ant to organize itself as a bank holding company, bringing it under stricter disclosure norms and capital requirements.

The regulators also cancelled an information sharing partnership with Alibaba’s cloud computing business on the pretext of a lack of adequate response and action on a cybersecurity vulnerability.

A delisting threat has also been an overhang on BABA stock amid the not-so-cordial relations between China and the U.S.

What to Expect From Alibaba’s Q3 Results?

Alibaba is scheduled to release its third-quarter results on Thursday, before the market opens. Analysts, on average, estimate the company to report earnings per share of $2.56, down from $3.35 per share a year ago. Revenue is estimated at $38.92 billion, marking a 15.6% YoY increase and a 25% quarter-over-quarter rise.

Ahead of the results, BABA stock received a string of downward price target adjustments. Mizuho Securities analyst James Lee cut his price target for the stock from $215 to $180. The analyst is bracing for a “challenging quarter” but expects the CMR revenue to bottom in the March quarter.

The Bottom Line On BABA Stock

The present is tense, although the future could be perfect for BABA stock. The market has priced in a slowdown in commerce revenue for the December quarter. The magnitude of the slowdown and commentary concerning the outlook for the fiscal year 2021 that ends in March 2022 could move the stock on Thursday.

Given that the stock has fallen way too much ahead of earnings, a sharp retreat from the current depressed levels is unlikely. A consolidation around the recent trading range is more likely in the near term.

BABA stock could be in for a turnaround as the dark skies surrounding the company’s fundamentals clear up. The current level, therefore, provides an attractive entry point to partake in the long-term opportunity presented by this high-profile Chinese tech name.

Shanthi is a contributor to InvestorPlace.com as well as a staff writer with Benzinga. Equipped with a Bachelor’s degree in Agriculture and an MBA with specialization in finance and marketing, she has about two decades of experience in financial reporting and analysis, and specializes in the biopharma and EV sectors.

PTON Stock Runs Into the Spotlight Thanks to Unexplained Peloton Outage