Apple (NASDAQ:AAPL), the most valuable global corporation, is a staple in many portfolios due to many pulling factors. Although not a growth stock in its strictest sense, it is still considered one. And its recent quarterly results are ample proof that AAPL stock is a safe haven that can defy the odds and consistently reward investors.

The high valuation accorded to the stock is attributable to the “stickiness” of the Apple ecosystem, or its ability to retain users, Loup Funds co-founder Gene Munster said.

The active iPhone user base has swelled to 1.8 billion, the company said on its December quarter earnings call. The statistic is commendable, as it has come despite macroeconomic headwinds and speaks loudly of the strong demand for Cupertino’s products.

Historically, Apple stock performs better in the second half of the year. The reason is not hard to guess. The company has its most important hardware launch event of the year in the second half. Moreover, the company’s has its best sales performance in the December quarter, which encompasses the holiday selling season.

Here’s how Apple stock fared in each half the calendar years since 2014: 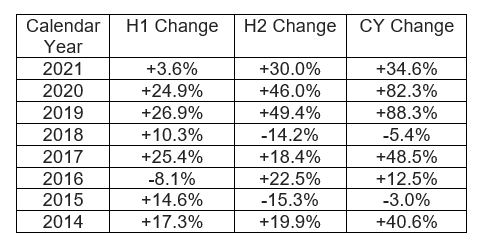 Although there have been outlier years, typically Apple stock has done well in the second half more often than in the first half. The trailing three fiscal years have demonstrated this very clearly. Apple has been riding high on the back of an extended iPhone supercycle. Supercycle is a period of elevated sales for a product.

The current iPhone supercyle was set in motion by the introduction of the 5G-enabled iPhone 12 lineup in late 2020, and it is expected to extend through 2022.

December-quarter results reported last month showed that Apple’s iPhone sales jumped 94% quarter-over-quarter to $71.63 billion, or about 58% of the total revenues. On a year-over-year basis, the growth was 9.2%.

Why Things Can Be Different This Time for AAPL Stock

This time around, AAPL stock has some key first-half catalysts that can move the needle for the stock. Bloomberg columnist Mark Gurman has suggested that Apple’s first hardware event could come as early as March 8. Gurman has track record of predicting Apple events and launches with a fairly good accuracy.

Apple will announce its next-gen iPhone SE, a low-cost, affordable phone, at the event. This first update to the iPhone SE model in two years will add 5G capabilities, an improved camera and a faster processor. An improved iPad with 5G capabilities is also in the pipeline.

Gurman is bracing for a new Mac armed with in-house Apple chips as well. Apple will also release the next iteration of its operating system – the iOS 15.4, which could come with Face ID support for people wearing masks, Gurman said. He also expects the unveil of a Universal Control that lets Apple customers use a single keypad and track pad across Apple devices.

Apple’s annual Worldwide Developers Conference will follow in June. The company will likely round off the year with more than one fall hardware launch events, wherein it would release the next-iteration of the iPhone.

The emergence of Apple’s Services business as one of the major profit centers has helped the company take seasonality out of its business to some extent. The share of Apple’s total revenue that Services makes up has been increasing over the recent quarters.

The Services business’s contribution to total revenues topped 20% in the third and fourth quarters of the fiscal year 2021. The share dipped to about 15% in the December quarter, as historically the holiday quarter has heavy weighting toward product sales.

Another noteworthy aspect about the business is its superior margin profile. Apple’s 10-Q filing shows the gross margin of the Services business stood at 69.7% in FY2021 compared to 35.3% for products.

The Bottom Line on AAPL Stock

Cupertino has  signaled that component shortages are easing. This will likely remove supply-side bottlenecks, allowing the company to produce enough to meet the robust demand.

Wedbush analyst Daniel Ives is of the view the underlying growth factors continue to be supportive for tech stocks in 2022. The analyst sees the risk-reward for “front tech stalwarts” such as Apple and Microsoft (NASDAQ:MSFT) as “compelling … at current levels.”

Apple’s shares have shed about 3% in the year-to-date period amid macroeconomic worries and the tech sell-off. The correction has made Apple’s stock more attractive in terms of valuation. AAPL stock currently trades at 28.3 times forward earnings, only slightly higher than S&P 500’s 24.56.

The average analysts’ price target for AAPL stock is $193.02, according to TipRanks. This suggests the stock has about 12% upside from current levels. Given the stock’s recent underperformance and the multiple catalysts that will likely materialize in the coming months, Apple could be ripe for picking.

Shanthi Rexaline is a contributor to InvestorPlace.com as well as a staff writer with Benzinga. Equipped with a Bachelor’s degree in Agriculture and an MBA with specialization in finance and marketing, she has about two decades of experience in financial reporting and analysis, and specializes in the biopharma and EV sectors.

The post Apple Is Poised for Big Gains Amid Spring Hardware Launches appeared first on InvestorPlace.