Apple Stock Is a Buy Despite Its Flaws
Advertisement

Wall Street enjoyed some relief-felt, bargain-hunting Monday. Tech heavyweight Apple (NASDAQ:AAPL) is showing what matters most to investors as AAPL stock adds an outsized 4% compared to gains of  about 1.60% and 1.86% in the Nasdaq and S&P 500.

Following last week’s fearful bear market scare in the S&P 500, encouraging performance guidance from JPMorgan & Chase (NYSE:JPM) and optimism the White House may eliminate Chinese trade tariffs has led to a less-than-surprising rally. And maybe less shocking, AAPL stock is leading the way higher out of its own deeper corrective cycle.

But can one day make a positive trend change in Apple shares that’s ripe for purchase? Let’s look at some of the bearish and bullish arguments surrounding AAPL stock and one method in which investors’ can buy more confidently and smartly for the long haul.

Apple Is Still Growing But…

Apple. The iconic tech giant remains one of the most coveted brands around the world. Investors such as Warren Buffett’s Berkshire Hathaway (NYSE:BRK-A, NYSE:BRK-B), and AAPL stock’s second largest shareholder, don’t have to go very far to appreciate that fact.

For fiscal 2021 AAPL reported it had grown its revenues 33% year-over-year and profits by a stunning 71%. This past quarter the company topped street views and saw 825 million paid subscriptions within its growing software and services ecosystem.

Given the state of a challenged macro environment and a market capitalization of $2.23 trillion that’s only second to energy giant Saudi Aramco (which overtook AAPL stock’s crown on the back of surging energy prices), there’s little denying Apple’s ongoing global reach.

But this year’s double-whammy of restrictive shutdowns in China tied to Covid-19 and Russian invasion of Ukraine with their combined inflation, supply chain and consumption consequences are set to take bite out of AAPL’s growth this year. Revenue and earnings are forecast to climb by just 8% and 10% in 2022.

It Takes Two to Consummate a Trade in AAPL Stock

This year’s significant year-over-year squeeze on profit and revenue growth may sound like a canary in the coalmine. But it would still amount to an admirable increase in Apple’s top and bottom lines in a tough operating environment.

Also, if we’re to trust recent words and actions from Berkshire’s Oracle of Omaha, in conjunction with a bloodied 20% or so price correction this year, AAPL stock is being served up just right for buyers too. Berkshire has been buying shares in 2022 on weakness imbued by the tech company’s business and outsized stock repurchase program.

But not everyone is impressed with Apple.

Fund manager Michael Burry who famously made $700 million wagering against the housing market prior to the 2008 — 2009 financial crisis has targeted AAPL stock as a short. A recent Securities and Exchange Commission (SEC) disclosure notes bearish put positions valued at $36 million and nearly 18% of his firm’s portfolio.

So there may be something to that bet. Apple isn’t cheap to own on a historical basis. Today’s AAPL stock is priced more than 22 times earnings and 6.5 times sales. By comparison in the decade prior to the start of the pandemic shares traded roughly in the mid-teens versus earnings and mostly on either side of 3 times sales. 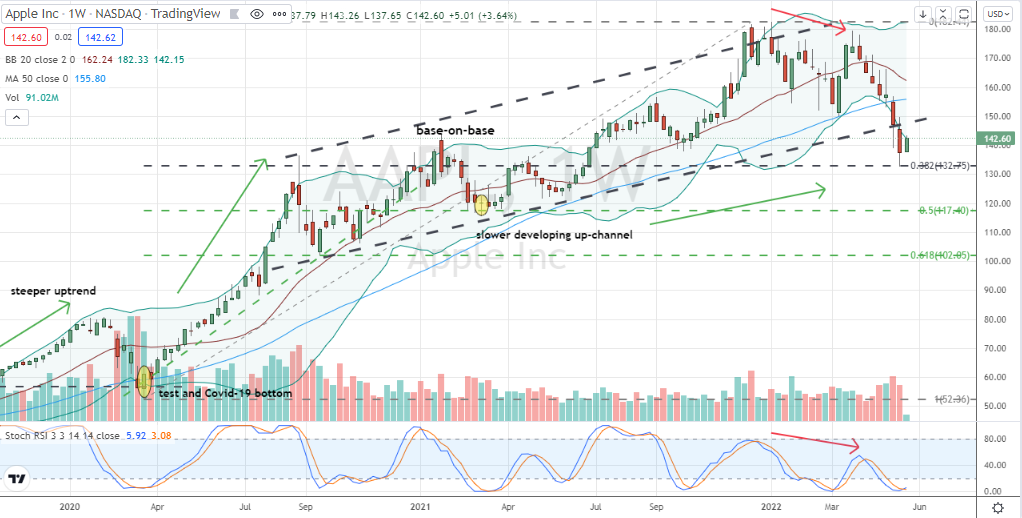 Monday was a good session for bulls like Warren Buffett in AAPL stock and less productive for bears such as Michael Burry who are holding bets against the company’s shares, and which have another negative feature of being time sensitive in nature.

Of the two, I’m more agreeable with Berkshire’s stock ownership of Apple. And buying AAPL stock right now has the added advantage of shares testing Apple’s 38% retracement of its Covid-19 price cycle and having a bullish weekly oversold stochastics signal in place.

To be fair to Michael Burry, his wager against AAPL does have a broken channel line working in its favor and lower lows and highs. Also, if Monday’s bargain-hunting is going to turn into something more substantial, the market will still require a follow-through day.

Bottom line, amid today’s larger bulls and bears and if investors do decide to buy AAPL stock, take a cue from The Big Short investor and hedge downside exposure with a long put. And as the Oracle has been known to do from time to time, combine the married put positioning with a call sale to form a limited-risk, actively-managed collar to help buy and sell more efficiently in bear and bull markets.

The post Apple Stock Is a Buy Despite Its Flaws appeared first on InvestorPlace.