Buy or Sell Amazon Ahead of Stock Split and After 40% Decline?
Advertisement

Amazon (NASDAQ:AMZN) is no longer one of the formidable FAANG stocks that investors can depend on. Or at least, depend on in the sense of bucking the overall market trend. AMZN stock has fallen more than 40% from its all-time, but in reality, it stalled out quite a while ago.

Sadly, though, it’s not even the worst-performing FAANG component. Both Meta (NASDAQ:FB) and Netflix (NASDAQ:NFLX) have fallen considerably more. The latter of the two has seen a peak-to-trough decline of more than 75%.

That said, AMZN stock clearly lags the financial juggernauts of FAANG, which are Alphabet (NASDAQ:GOOGL, NASDAQ:GOOG) and Apple (NASDAQ:AAPL).

The question now becomes, has the stock sold off enough to justify a long position in Amazon? Yes — provided investors are okay accumulating through more downside through 2022. So, with that in mind, let’s dive in and take a closer look at AMZN stock.

When Amazon reported earnings on April 28, the company missed on earnings expectations and reported in line sales results. However, it was the comments around inflation that really drove home the point:

“Our teams are squarely focused on improving productivity and cost efficiencies throughout our fulfillment network…This may take some time, particularly as we work through ongoing inflationary and supply chain pressures.”

Then, Walmart (NYSE:WMT) reported earnings and suffered its worst one-day performance in 35 years. The next day Target (NYSE:TGT) fell 25% in a single session as inflation mowed down its profits. Inflation is one thing, but raging inflation is another — which is what hit these two retailers in mid-May.

Not to get too macro here, but we have the Federal Reserve raising interest rates, while inflation continues to cut into consumers’ spending power. That’s not a good sign for Amazon or anyone else for that matter. Rising inflation not only limits spending power, but it drives up operating costs. When consumers pull back on spending, it can leave retailers with bloated inventories and weakening margins.

In other words? Amazon could face higher costs and pressured revenue at the same time. Just look at the guidance. Management expects revenue between $116 billion and $121 billion vs. estimates of $125.2 billion.

Inflation is an issue that can either go away in the not-too-distant future or linger around and create ongoing headaches. Either way, though, Amazon has some serious long-term opportunities despite the short-term headwinds.

Its Prime membership will keep a solid form of cash flow coming through the door. It helps that it recently raised membership prices from $119 to $139, a near 17% increase. Overall, Amazon reportedly has 200 million Prime members, and while this is simply a back-of-the-envelope equation, that extra $20 per membership equates to around $4 billion in additional cash flow. In total, we’re talking about $28 billion in annual cash flow.

That said, not everyone pays the same and there are ways around the full price with discounts for students, and the service is cheaper in other countries. But you get the point: Prime is a big cash flow source for Amazon.

Moreover, let’s also not forget Amazon is the largest cloud player, as its Amazon Web Services (AWS) unit dominates its peers. That too should help steady the ship even amid a rocky stretch in the macro world.

Despite everything going on, analysts expect revenue to grow 12% this year and 17% next year. While these estimates are prone to fluctuations, it shows just how reliant on Amazon businesses and consumers have become. As a result, it has built quite the moat. 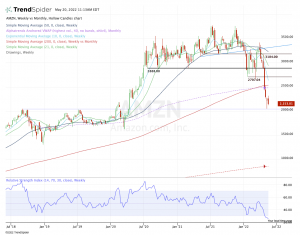 In market environments like this, “backing up the truck” can be a dangerous strategy. At times, it’s warranted, but if the stock doesn’t bounce or support doesn’t hold, it can turn into a slippery slope in a hurry.

That said, I have gone back through years’ worth of price action in regards to AMZN stock. Going back to 2010, there has not been one 40% correction in all that time. That’s right. One of bears’ favorite stocks to attack before Tesla (NASDAQ:TSLA) came around has not had one 40%-plus dip in the last 12 years.

AMZN stock is down more than 40% from the all-time high. At its low, shares were down nearly 46%. Now that doesn’t mean it can’t turn into a down 50% or 60% scenario, as we don’t know where the bottom ultimately is.

But the reality is, we haven’t seen AMZN stock suffer this kind of a pullback since the financial crisis. For long-term investors who are bullish on Amazon, they can begin accumulating the stock on this deep discount. If shares can really heat up in the short term, $2,500 to $2,650 could be in play.

The post Buy or Sell Amazon Ahead of Stock Split and After 40% Decline? appeared first on InvestorPlace.

4 Reasons to be Optimistic about Fintech Right Now