Can the S&P Support Hold?
Advertisement

Why Is SOFI Stock Down Today?

Will the S&P find bullish legs or nosedive?… the indicator our technical experts are watching that appears bullish… how things played out the last three times this indicator triggered

Will the S&P hold support?

That’s the most pressing question facing investors at this moment.

After falling hard all year, the S&P staged a furious rally beginning in mid-June that saw the index gain 17% over about a month.

To many bulls, it was evidence that the bear market was over. To many bears, it was just a bear-market rally.

Since mid-August, the S&P has now fallen back to its mid-June low. This suggests it was a bear-market rally.

What if it’s something that technical traders call a “double bottom”?

In other words, what if the June rally was just the market’s first attempt at bullishness? That attempt fizzled, but that doesn’t mean a complete failure.

Instead, what if the S&P is now “double-bottoming,” or re-testing its June-low? And if it passes this test, that’s when the rally will resume, only this time with greater strength.

In the chart below, we show why this “make-or-break” level is such a big deal.

We highlight the support level at which the S&P finds itself today, and we add a trendline showing the progression of “lower lows” for the S&P on the year that we’ve extrapolated.

If support holds, wonderful. All eyes will be on how quickly we can race back toward the 4,300 level to re-test August’s resistance.

But if the S&P can’t hold support, then the “lower lows” trendline suggests we’re on our way toward the 3,300 area. 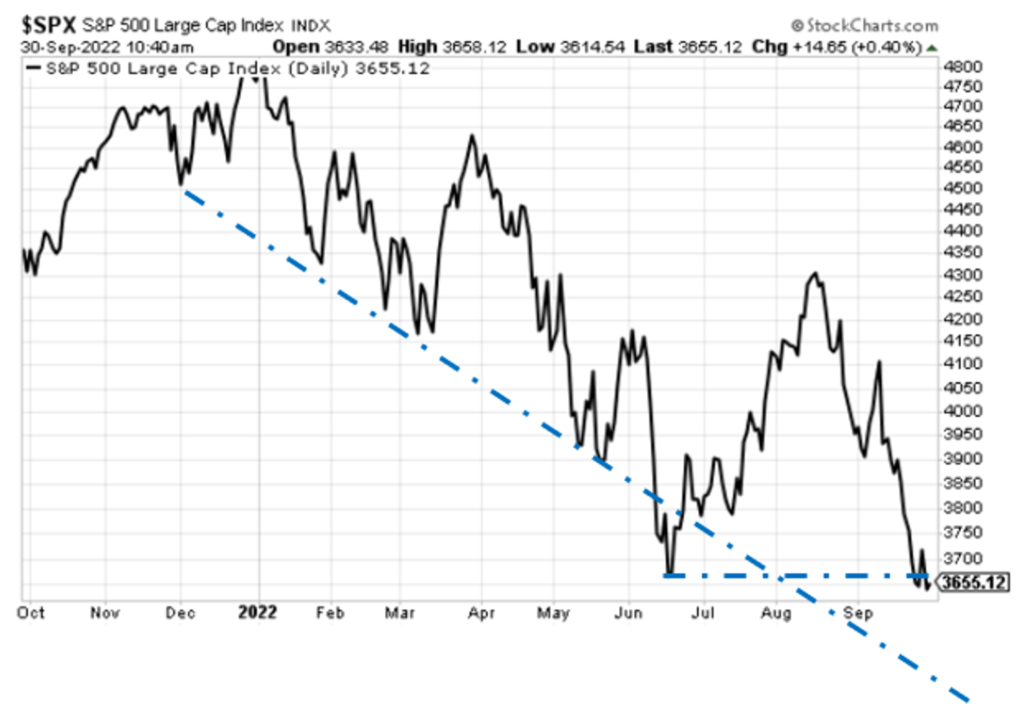 Clearly, this is an important moment for the markets and your portfolio in the near term.

So, back to our opening question…

Will the S&P hold support?

According to our technical experts John Jagerson and Wade Hansen of Strategic Trader, we have an excellent chance:

One of our favorite sentiment indicators is telling us traders have likely hit their point of maximum pessimism. This is a strong contrarian signal that the bulls may start to recover some short-term momentum.

Today, let’s look into John and Wade’s latest update to see why we shouldn’t count-out a bullish bounce.

How to turn the “fear gauge” into a crystal ball

For newer readers, John and Wade are the analysts behind Strategic Trader, InvestorPlace’s premier trading service. John and Wade combine options, insightful technical and fundamental analysis, and market history to trade the markets in all sorts of conditions.

Since mid-August, those conditions have been sharply lower. But there’s one indicator John and Wade are watching that leads them to believe this could be changing.

It involves the CBOE S&P 500 Volatility Index, known as the VIX. Many investors are familiar with this. It’s a measurement of the anticipated volatility being priced into S&P 500 options for the next 30 days. An elevated VIX reading suggests greater anxiety amongst traders.

But John and Wade note that sometimes focusing only on the next 30 days isn’t a long enough view. It can be helpful to expand your horizons to the next three months, or 90 days.

For such a longer-term outlook, traders look at the CBOE S&P 500 3-Month Volatility Index (VIX3M). It’s a measurement of the anticipated volatility being priced into S&P 500 options for next 90 days.

And by comparing the VIX with the VIX3M, investors can get even more information.

Interestingly, there are times when traders will price in a greater chance of a larger move in the short term than in the long term because they are nervous the market is about to drop. This pushes the value of the VIX up higher than the value of the VIX3M.

But when traders are anxious about an immediate market drop, the value will rise above 1. This shows higher anxiety for the next 30 days compared to 90 days.

So, where are we today?

Here’s John and Wade with those details:

Right now, the VIX/VIX3M chart has been >1 for the past three days (see Fig. 2) [written on Wednesday].

This tells us that traders have pushed the market toward maximum pessimism and are likely to stop and take a deep breath.

As you can see in Fig. 2, traders have pushed the VIX/VIX3M above 1 four times during the past year.

Matching the red numerical points in the chart above to how things played out in the market, here’s what John and Wade found:

For example, the S&P has already dipped below 3,650 on a handful of occasions this week, as you can see in the S&P’s 5-minute chart beginning Monday. 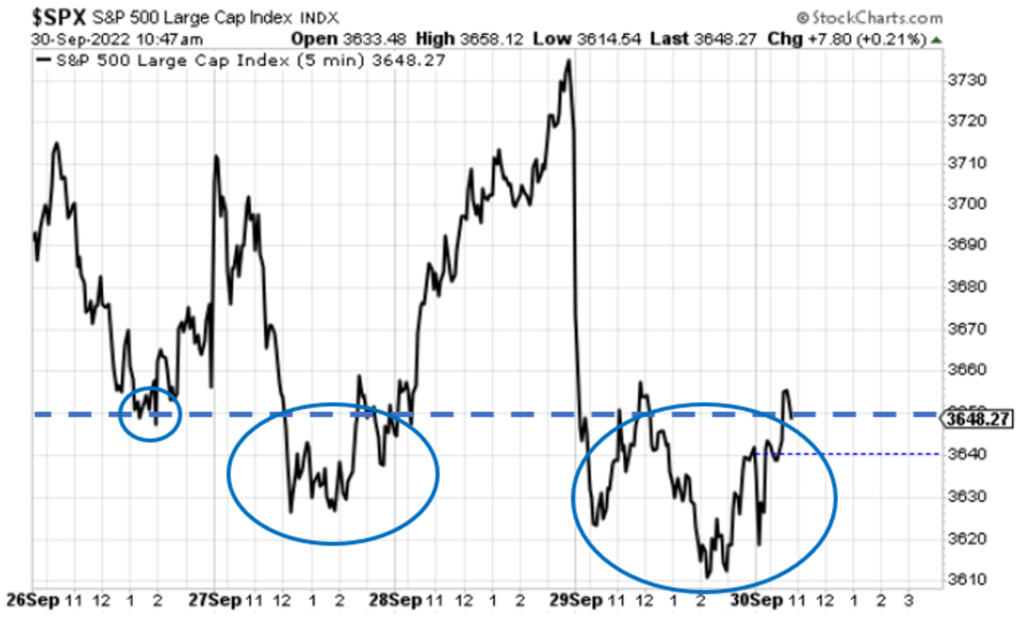 So, as long as the S&P remains in this general area, we’re still “holding support.”

Putting all of this together, here’s John and Wade’s final takeaway:

Will the index bounce higher from this support level?

We think it has a good chance of moving back up toward 3,800. Wall Street is already expecting the Fed to continue being aggressive with its rate hikes so there shouldn’t be any big monetary policy surprises.

As long as we don’t get any terrible economic surprises, traders may finally start to buy the dip.

We’ll keep you updated here in the Digest.

The post Can the S&P Support Hold? appeared first on InvestorPlace.