Cardano Doesn’t Look a Lot Better After This Recent Rally

The decline came after the coin surged to its highest level in more than a month, then fell over 40% in just five days to new recent lows. That’s not the type of action that bulls want to see.

However, those who read my piece on Cardano a few weeks ago, are not all that surprised by the action. I will readily admit that I didn’t see the rally to ~$1.65 coming. That said, $1.20 was a support level that was waning, by the way.

When it gave out, it ushered in a wave of sellers. Now what do we make of the chart? 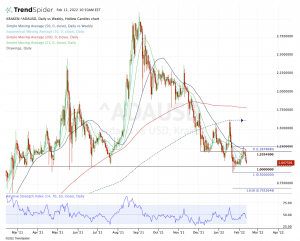 When I look at the chart of Cardano, there are definitely some concerns.

The cryptocurrency broke below the $1.20 mark, found support above the key $1 mark, then soared to the $1.65 area. However, amid that rally, the 50-week moving average acted as resistance again, just as it had in late December.

Always try to keep a neutral bias when approaching a chart. Look at prior price levels and key moving averages (or whatever indicators and measures you prefer). See how the asset is reacting to these levels. Is it bouncing and drawing in buyers or is it being rejected and greeted by sellers?

In this case, the 50-week rejected Cardano and it cratered. Soon we saw it break $1, which has been key support for more than a year. It bottomed at 92 cents, but now we’re seeing Cardano being rejected by prior support at $1.20!

Now in the $1.05 range, the stock remains vulnerable. “Click to Enlarge” the chart above and notice how well Cardano did to recover the $1 level and hold this mark as support.

For the bulls’ sake, I’d love to see cryptocurrency hold this mark and give us a higher low. If that’s the case, getting up through $1.20 and the 50-day moving average is vital to continue the up-move.

If it breaks $1, the 92 cent mark is in play. That could open the door for a larger pullback, perhaps down to the 70 cent to 75 cent range. That’s where the 161.8% downside extension comes into play.

For now, just go from level to level.

When it comes to the crypto market, Cardano is not at the top of the list. Instead, that’s occupied by Ethereum (ETH-USD), Bitcoin (BTC-USD) and a few others. These two have been trading pretty well lately, which is a good sign for bulls.

While they have been dipping in recent days, these two have been holding up better than Cardano and many others.

Personally, I would feel most comfortable in Bitcoin and Ethereum for the time being, although there is risk to the group. Specifically “risk-off” assets have been under pressure lately.

For stocks, the reasons why are simple.

The Fed is preparing to increase interest rates, inflation remains high, geopolitical tensions continue to rise and growth stocks remain in a bear market. How that translates to cryptocurrencies isn’t as clear.

However, I have started to notice there is a similar (albeit with more extreme moves) correlation between growth/tech stocks and leading cryptocurrencies. Over the last few weeks, Bitcoin and others have been pressing higher, which may lead to some upside follow-through.

The post Cardano Doesn’t Look a Lot Better After This Recent Rally appeared first on InvestorPlace.

Bionano Stock Looks to Have a Monster Comeback in Its Future