Don’t Overthink This One: Buy the Dip in Snap Stock!
Advertisement

Did you see Snap (NYSE:SNAP) stock yesterday? Shares of the social media company dropped more than 40% after disclosing it would miss second-quarter financial targets – and, unbelievably, we think this is a golden buying opportunity in Snap stock.

The economy will rebound soon enough. With it, so will consumer and advertising spending. And Snap will earn more than before – because the company operates a “super-sticky” social media platform with 330 million daily active users reaching 75% of the 13- to 34-year-old demographic in more than 20 countries.

That is the sort of the platform with a chokehold on youth demographics that will attract tons of ad dollars for years to come.

In the meantime, SNAP is now trading at its lowest valuation multiples ever.

Don’t overthink this one: With Snap stock, you have a long-term growth asset now trading at a record-low valuation. Buy the dip… check back in three years… ring the register for 500% or greater gains.

The 2022 Ad Recession Has Arrived

Just four weeks ago, Snap issued bullish Q2 guidance, calling for revenues to grow about 20% to 25% this quarter.

In those four weeks, the economy has slowed so dramatically that – last night – Snap called for revenues this quarter to grow no more than 20%. The implication therein is that revenue growth decelerated a jaw-dropping 50% over the past four weeks.

This is not unusual.

The advertising markets are traditionally a bell-weather of the global economy.

This was true in the aftermath of the Dot-Com Crash in the early 2000s, which spilled into a recession. It was true again during the 2008 Great Financial Crisis. And it was true a third time during the outbreak of the Covid-19 pandemic in 2020. 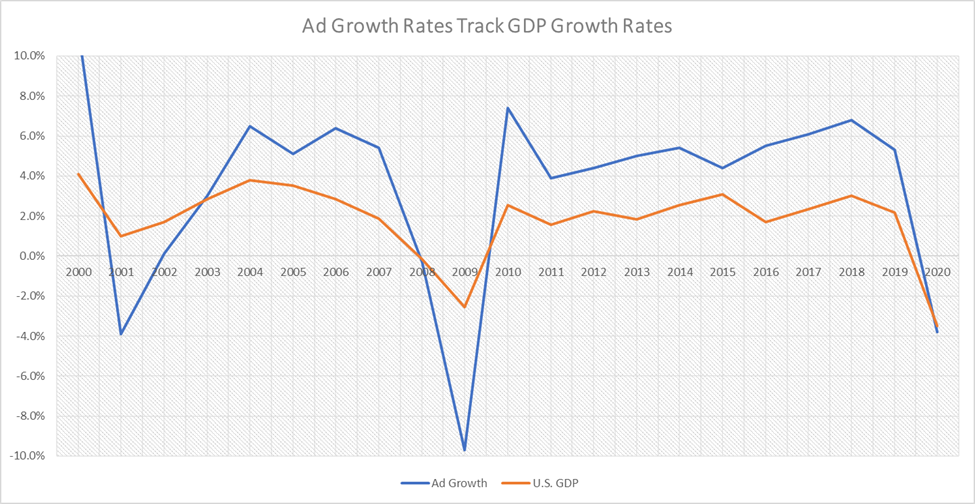 It appears we could be in the early stages of a similar advertising slowdown in 2022.

To be clear: We are not saying that the U.S. economy is knocking on the door of a recession. Rather, we are saying the economy is slowing and the recession risks are rising. In response, advertisers are pulling back ad spending, the likes of which will likely create an ad market slowdown in 2022.

Snap’s warning speaks to this reality. As do the flurry of bad earnings reports last week, from retailers like Walmart (WMT) and Target (TGT). And the continued deluge of negative economic data, including yesterday’s surprise 16% drop in April new home sales.

We’re in the midst of an economic slowdown.

But we’re buying this dip with both hands.

The big-picture bull thesis on why to buy the dip in digital ad stocks is very simple. It goes something like this:

The Snap stock bull thesis follows a similar logic. But it is much more than just “buy the dip in Snap stock because its ad trends will rebound and the stock is cheap.”

Snap is the leader in the next generation of the internet.

Today, we sit in the early innings of this transition.

At the forefront of this transition in the social media space is Snap.

Sure, Meta talks a big game with its huge name-change and all. But the reality is that what Meta is building – this metaverse where we all play ourselves as digital avatars – is not the future.

The future is the integration of augmented reality technologies to enhance our physical experiences, not replace them.

Snap is building that future.

The company is building a suite of AR tools to enhance a consumer’s physical experiences, starting with a focus on enhancing the shopping process. 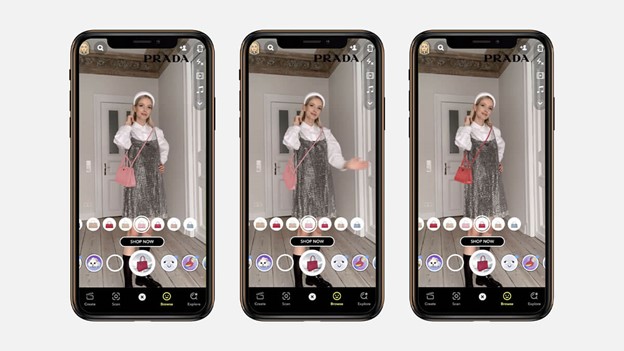 This is the future of shopping.

A consumer goes online, and instead of browsing through static 2D images of apparel to try and decide what would look good on them, they will leverage AR technology to virtually try on outfits, shoes, bags, make-up, glasses, and more. The stuff that looks good, the consumer will buy.

AR shopping is the future.

Snap is at the epicenter of this future. Specifically, it is building the core technology – AR software enabling the recreation of 2D images as 3D virtual replicas that can be placed on any object in a camera’s purview – that will facilitate this future.

This is special technology. It’s game-changing technology. And Snap knows this. So, the company doesn’t want to just keep this tech on its platform and forever be a niche social media company that only the kids use to message each other. Snap has opened up this technology to be used by merchants on their own websites.

So, I repeat: Snap stock is a fantastic long-term investment opportunity. You’re not just buying a popular social media operator with a burgeoning digital ad business. You’re buying the future backbone of shopping.

And that future backbone of shopping is on fire-sale right now.

Following yesterday’s selloff, Snap stock may not be trading at its lowest price ever, but because of the company’s rapid sales growth, it is trading at 4.6X trailing sales. That marks an all-time low price-to-sales multiple for Snap by about 25%. 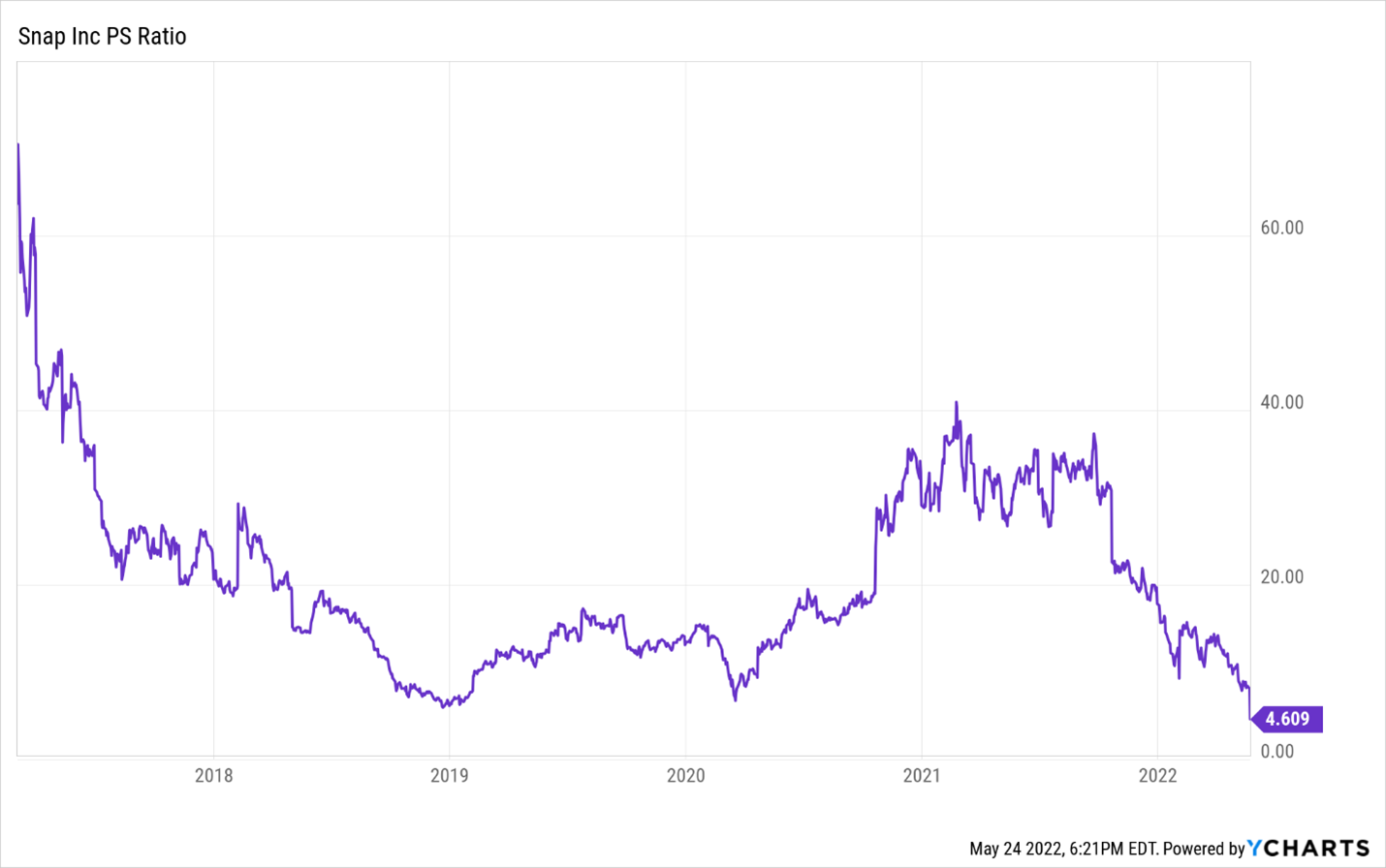 Snap stock bottomed in late 2018 around 6X sales. It bottomed during the pandemic outbreak at around 7X sales.

At all-time low valuation levels, is a similar massive rally in store for Snap stock this time around?

We’re very confident it is…

Everyone loves to think of Snap as this niche social media platform only teenagers use to send silly — and sometimes lecherous — messages to one another.

I get it; I used to view Snap in that light. When the company IPO’d in early 2017, I was one of the stock’s most vocal bears.

But in late 2018, a buddy of mine in Silicon Valley — a software engineer at one of the world’s leading technology firms — met Snap CEO Evan Spiegel. He told me to not bet against Snap. “Spiegel is building the future of the internet,” he said.

My friend was right.

Spiegel has much bigger ambitions for Snap than just this niche social media platform. That’s just the start. His vision for Snap is to build a company that provides the tools to power the next generation of the internet.

That vision is coming to life as we speak.

Unfortunately, it’s coming to life during the shakiest stock market since 2008. The benefits of Snap’s new AR technologies, consequently, is being drowned out the company’s ad slowdown.

But the ad slowdown will pass, like every ad slowdown before it. When it does pass, Snap will be left with a complete set of AR tools it needs to revolutionize the internet.

This isn’t the end for Snap. It’s just the beginning. Thanks to the coming Augmented Reality Revolution, buying Snap today will net you multiples on your investment over the next few years.

The post Don’t Overthink This One: Buy the Dip in Snap Stock! appeared first on InvestorPlace.

Gas Price Predictions: How High Will Gas Prices Be in June 2022?