Disney Layoffs 2023: What to Know About the Latest DIS Job Cuts

The S&P 500 finally did it. The major stock market index dropped into a bear market Friday – representing a peak-to-trough decline of more than 20% — after flirting with bear territory for about a week.

But it was a short-lived stint. The S&P 500 spent all over two hours in bear market territory, before rallying into the close and finishing the day just outside of that threshold.

Is that bullish? Bearish? Where are stocks going next?

To answer those questions, we performed an in-depth historical analysis of previous corrections – and what we discovered is actually pretty bullish!

The first thing we need to understand about bear markets is that, while scary, they are not uncommon.

In total, there have been 12 bear markets since World War II. That represents a bear market about once every six years. The last one was in 2020, and the one before that was in 2007, so this is the third bearish correction in 15 years – roughly consistent with historical standards.

During those 12 corrections, the average peak-to-trough decline was about 34%. The average duration of the decline was 285 trading days. Therefore, historically speaking, bearish markets tend to whack stocks by about 35% over the course of a year. 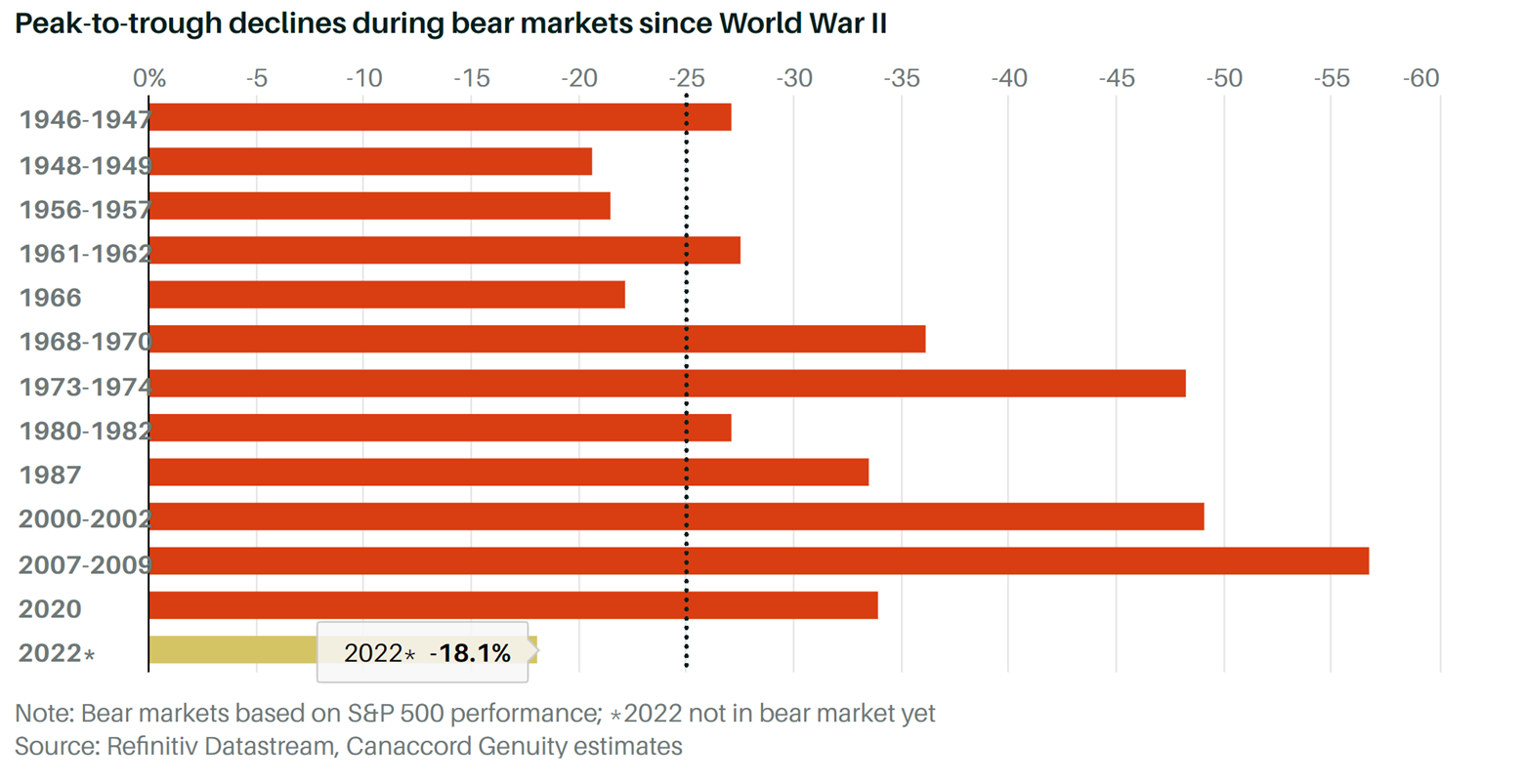 The current market is clocking in around 100 days with a 20% decline. By those metrics, then, this correction is just getting started.

But upon closer inspection, it appears this bear market may actually be nearing its end.

Not All Corrections Are Equal

Perhaps obviously, not all bear markets are created equal.

We believe you can segment these bearish corrections since World War II into four different baskets. Those four baskets are as follows:

The current market is not a flash crash. It has already lasted longer than both previous flash crashes, and fundamentally, shares no common characteristics with either the 1987 or 2020 flash crashes.

Rather, it is either a shallow, regular, or deep bear market. Our analysis suggests it’s of the shallow variety – which means the bottom is right around the corner!

Are We Close to a Bottom?

We do not believe the current bear market shares much in common with previous deep bear markets.

Those were brought on by a 3X increase in oil prices seemingly overnight (1973), elevated stock valuations that peaked at 26X forward earnings (2000), and a subprime lending crisis that blew up (2007).

We don’t have any of that today.

Oil prices are up, yes, but they haven’t increased by 3X in a matter of days. Also, valuations were elevated, yes, but the S&P 500’s forward price-to-earnings multiple peaked out at 22X – well below the 26X peak from the dot-com bubble. Currently, the S&P trades at 16.5X forward earnings, which is largely in line with where stocks traded close to their bottom in 2002.

And there is no subprime lending bubble in 2022. We have elevated housing prices. But it’s a supply shortage driven bubble that’s propped up by a lot of all-cash buyers. No financial crisis hiding in plain sight here.

It stands to reason that we don’t have a deep correction today.

What about a regular bear market?

That also looks unlikely. In particular, the regular bear market of 1980 was mostly kickstarted by oil surging to $140 a barrel. We’re at $110/bbl today, and $140 looks unlikely baring some significant supply disruption.

The last option, of course, is a shallow bear market – and, as it turns out, today’s market shares a lot in common with the shallow bears of the 1940s, 1950s, and 1960s. Those were mostly Federal Reserve-driven bear markets wherein the Fed hiked rates too much, too fast to combat rising inflation, and accidently spilled the U.S. economy into light recessions.

That’s nearly an identical situation to the one we have today.

Therefore, we believe the 2022 market should be classified as a “shallow” one. Historically speaking, shallow bear markets result in 25% drops off all-time highs. We’re already down 20%. Therefore, history says the current market only has ~5% more to fall before bottoming.

On the Heels of a Massive Breakout

Every market correction eventually and inevitably turns into a bull market.

The key to making money in this market is to simply identify the point at which that turn happens – the inflection point at which bear markets turn into bull markets.

It’s almost here. And when it does arrive, we think the potential gains could be enormous.

That’s particularly true for a specific group of stocks that we’ve identified which are already soaring as the market is trying to work through this market.

Once this market does reverse course, these stocks will lead the rebound rally in a big way.

The post How Today’s Bear Market Will Lead to a Massive Breakout appeared first on InvestorPlace.

Don’t Believe This Is the Bottom

Tread Carefully With SoFi Stock After Its Sharp Rebound