Keep Your Eye on Europe
Advertisement

The Rhine River is adding to Europe’s economic woes … assessing the impact of an international slowdown on the S&P … is Wall Street expecting too much dovishness from the Fed?

Europe’s impending recession is about to get much worse.

To understand why, let’s turn our attention to the Rhine, which is Europe’s longest, and arguably, most important river.

It flows through six countries – Switzerland, Liechtenstein, Austria, Germany, France and the Netherlands – before dumping into the North Sea near Rotterdam.

It also serves as a key European trade route, responsible for roughly $80 billion in annual commerce, as well as the daily trade of hundreds of thousands of barrels of oil products.

The problem is it’s drying up.

The water-levels are so low they’re nearly impassable for trade barges in certain areas.

This is threatening to tighten the chokehold around a frail European economy that’s already gasping from the pandemic and drastically-lowered energy imports from Russia.

The Rhine is one of Europe’s great working rivers and industry here relies on barges to fetch and carry raw materials and finished products to and from the power plants and factories that line the riverbank.

The water’s already too low to allow some of the larger vessels through. Others have been forced to reduce their cargo, lighten the load so that they sit higher in the water. And they’re keeping a close eye on the river levels.

It’s likely that the Upper Rhine will be closed to traffic completely, says Martina Becker from HGK shipping.

Low water happens every year, she tells us, but it’s not as extreme as this.

Europe is already staring down a recession that’s likely to be deep and painful, and impassable trade-routes will only make the problem worse, adding to supply shortages and inflationary pressures.

This is clearly terrible news for Europeans and their economy. But investors in the U.S. need to be watching as well.

Because nearly 30% of the market-weighted sales of the S&P 500 are international.

So, if Europe falls into a deep recession which hurts the European consumer… and if the euro continues to weaken against the dollar because of different central bank policies… then U.S. investors with lots of foreign exposure need to expect contagion.

A tale of two marketplaces

If I looked at your portfolio today and picked a random stock, would you be able to tell me how much of its revenues are sourced domestically versus internationally?

But some U.S. sectors are hugely reliant on revenues from foreign buyers, especially tech companies.

For example, Tesla gets 25% of its revenues from foreign sales. A full 54% of Alphabet’s sales are international. Both Netflix and Meta clock in at 59%.

But that’s nothing compared to Qualcomm. The semiconductor giant gets a whopping 96% of revenues from overseas.

Goldman Sachs reports that technology companies as a whole get 59% of sales internationally.

And it’s not just tech.

Insurance company Aflac has 70% exposure. Oil services giant Schlumberger is at 85%. Booking Holdings is at 70%. And Philip Morris gets 39% of sales internationally.

In the first half of the year, companies with heightened international revenue exposure got crushed, comparatively, to companies that sold mostly within U.S. borders.

…Shares of companies that get most of their sales domestically have outperformed more-global businesses in 2022 by about 9 percentage points, according to a June 22 report by Goldman Sachs strategist David Kostin.

U.S.-centric companies were down an average of 15%, as companies with higher percentages of foreign sales dropped 24%.

This is a massive performance differential.

By the way, though we’ve been focusing on Europe, the situation in China is deteriorating as well

Due in part to its draconian lockdown policy, the Chinese economy is struggling, facing a serious economic slowdown, and potentially a recession.

In fact, just this morning, we learned China has lowered two key lending rates and injected more cash into its economy, trying to prop it up after lockdowns contributed to huge unemployment numbers.

On top of that, China has a real estate crisis brewing, as well as simmering unrest from its population.

Bottom-line – look at your portfolio today. If your stocks have greater global exposure than you’re comfortable with, it’s time to do some pruning. The international situation is not headed in the right direction.

Meanwhile, is Wall Street getting out of touch with the Fed?

Last week, we finally got some relief on the inflation front when the Consumer Price Index fell from June’s reading. As importantly, the July number came in below forecasts.

This resulted in a huge day for stocks last Wednesday as Wall Street cheered the idea that we’re beyond peak inflation…even though the reading remained at a nosebleed level of 8.5%.

The cooler inflation print has many investors wondering if we’ll see a rate-hike of just 50 basis-points at the next Fed meeting in September instead of 75 basis-points. The longer-term extension of this line of thinking is that we could see some rate-cuts by early 2023.

But forget cuts for the moment. Returning to a slowdown in hikes, that’s what traders are now expecting based on the CME Group’s FedWatch Tool.

As you can see below, the probability for just a 50-basis-point hike in September currently comes in at 61.5%. 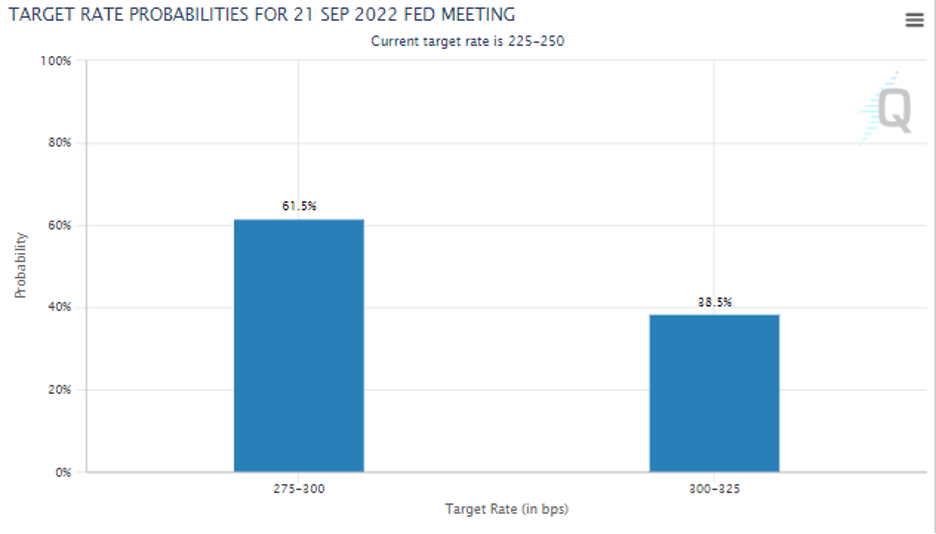 Source: CME Group
Even some Fed members are chiming in about just 50 basis-points

For example, last Thursday, San Francisco Fed President Mary Daly said her base case is for a half-percentage point hike in September.

I can’t say I fully understand this.

To me, it sounds like: “Hey, what we’ve been doing is finally showing signs of working after months of it not working! So, let’s stop doing it as much!”

I understand the Fed doesn’t want to move too fast. I also understand there’s a lag-time between a rate hike and its impact rippling throughout the economy.

That said, did we learn nothing from the Fed’s “stop-and-go” interest rate policy of the 1970s in response to its inflationary problem?

From The Wall Street Journal:

“Stop-and-go” refers to how the Fed oscillated between raising rates to tame inflation and then backing off to shore up growth—succeeding at neither.

It began in the late 1960s, when Chairman William McChesney Martin Jr. paused rate rises during a recession scare.

It worsened under Fed Chairman Arthur Burns, who raised rates significantly between 1972 and 1974 but cut them the following year in the midst of a sharp recession. Inflation fell but settled at still-elevated levels…

To avoid that mistake [today], “the Fed may not be able to pivot and cut rates quickly or at all” if a recession begins later this year, said Krishna Guha, vice chairman of Evercore ISI, in a recent report.

To be fair, Daly isn’t talking about cutting rates. But given how sticky inflation has proven, do we really want to back off at the very first sign of success?

On this note, please remember that the primary contributor to the recent easing CPI print was lower oil prices – but shelter and food costs continued to rise.

Yet, Wall Street seems to think that inflation is on its way out.

…We’re happy to see inflation start to move down, [but] I’d like to see a period of sustained inflation under control, and until we do that, I think we’re just going to have to continue to move rates into restrictive territory.

Is Wall Street factoring this into its latest bullishness?

As we’ve pointed out in the Digest, when looking at this latest Q2 earnings season, the phrase “lipstick on a pig” comes to mind.

Earlier this month in the Digest, we highlighted how the surprisingly “not terrible” performance of the S&P this earnings season is actually not what it seems.

If we exclude record earnings from the energy sector, then the S&P 500 would be posting a year-over-year earnings decline of 3.7% rather than its increase of 6.7%.

Now, if the Fed is going to keep taking rates into restrictive territory to get inflation back to 2%, that’s going to continue to squeeze corporate earnings.

Have analysts accounted for this?

Perhaps not to the extent necessary.

In fact, only now are we beginning to see analysts trim some of their late 2022 earnings estimates. In recent Digests, we’ve highlighted how this is worrying legendary investor Louis Navellier.

It doesn’t yet appear to be worrying Wall Street yet.

Bottom-line, between global economic headwinds and an inflation response from the Fed that might remain more hawkish than Wall Street is expecting, be careful about cannonballing into this latest market rally.

I’m not saying steer clear – there are some great deals out there (we profiled three from Eric Fry last week in the Digest ). But be selective. We don’t have a blanket “all clear” sign for earnings as we look out over the coming 12 months.

The post Keep Your Eye on Europe appeared first on InvestorPlace.

4 Hot Stocks That Indicate Meme Mania Is on the Rise