The housing market is on fire — and I believe the single best growth stock to buy for 10X potential gains in the 2020s is a disruptive housing stock.

But more on that later.

For now, just look at these housing numbers.

Those are some big numbers. Unsurprisingly, they’re big enough to scare some folks.

A January 2022 Fannie Mae survey found that just one-quarter of homeowners believe now is a good time to buy a home. That’s the survey’s lowest reading since the depths of the pandemic in May 2020.

Thanks to this low prospective homebuyer sentiment, many market pundits are warning that we’re in a housing market bubble that will pop in an eerie repeat of the 2005-06 housing crisis.

But that won’t happen. Instead, what will happen is a durable and unprecedented housing market boom that will last throughout the next decade.

Across the globe, countries and corporations have amassed tons of debt over their zero-interest-rate policies. Substantially higher rates would put tremendous pressure on the entire financial system. Central banks across the globe know this, including the U.S. Federal Reserve.

They won’t hike rates quickly or aggressively unless they absolutely have to. And that’s why, even in the face of record inflation these past nearly 12 months, central banks across the globe have barely moved.

Sure, they are going to move rates a little bit in the second quarter of 2022 because they feel like they have to do something to fight inflation. But as soon as inflation cools — and it already is cooling and will cool significantly by the summer — central banks will take their foot off the gas. And we won’t get any more rate hikes.

And so is red-hot housing demand, thanks to exceptionally favorable demographics.

Worlds Collide in the Housing Market

Long story short, millennials and baby boomers are coming together to create the biggest homebuying demand surge we’ve seen in decades. And this surge has legs.

Millennials have developed a reputation for postponing big life events, like getting married, having kids and buying homes. Now they’re doing all those things, as they’ve mostly reached an age and income where it makes logical and financial sense. And this will translate into tens of millions of new homebuyers entering the market over the next decade — while tens of millions of baby boomers are reaching the age where they are looking to downsize.

This unique, once-in-a-generation coupling is creating a huge surge of homebuying demand that should last throughout the 2020s.

And to enhance the price effects of this surge, the housing market has been, still is and will likely remain in a supply shortage. 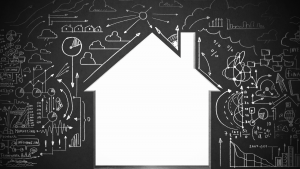 According to Stephen Kim, a housing analyst at Evercore ISI: “The industry would need to sustain a two-million-starts pace for a decade to bring the industry out of its current underbuilt situation.”

To that end, this market will be defined by low supply and high demand for the next decade — a recipe for strong home price appreciation.

Overall, I think the evidence here is pretty clear. This isn’t a bubble. The housing market is in the first innings of a decade-long bull market.

We believe that housing stocks will be big winners throughout the 2020s.

But those are far from the best housing stock to buy to play this decade-long market boom.

Instead, the best housing stock to buy right now is a completely different type of company — one that isn’t just a participant in the housing market but one that is completely redefining how the world buys and sells homes.

Here’s the thing: Nearly 40% of millennials — who are turning into the heartbeat of the housing market — are comfortable buying a home online.

Yep. You read that right. The home-shopping market is going to shift online because that’s how new buyers in the market want to purchase.

And at the epicenter of this trillion-dollar shift in the U.S. housing market is one technology startup — one tiny stock that will soar more than 10X over the next few years.

To find out the name, ticker symbol and key business details of this explosive investment opportunity, click here.

Meta is Betting Everything on the Metaverse, But it Won’t Be the Winner