Oil stock investors are rolling in record profits … will this trade continue rewarding investors? … gold bounces as we’d hoped … copper is also moving higher … where the market goes next

The price of oil might be down substantially from June highs, but investors in top-tier oil stocks haven’t noticed — they’re too busy counting profits.

If you haven’t been watching, oil stocks are crushing it this earnings season.

We can add BP to this list. It reported a profit of $8.5 billion yesterday. That’s its highest-reported profit in 14 years.

But with the price of West Texas Intermediate Crude (WTIC) down about 20% from its June high, and recessionary pressures mounting, is it time to take oil profits and run?

Legendary investor Louis Navellier weighed in on this question in his Accelerated Profits issue on Monday:

Yes, energy stocks were hit with profit taking between June 8 and July 14, as energy prices moderated in the wake of recession fears, massive key interest rate hikes and the fire at the liquified natural gas (LNG) hub in Texas.

However, crude oil prices have firmed back up, trading near $100 per barrel again, and natural gas prices have resumed their climb higher, rebounding nearly 66% in July.

In my opinion, energy stocks will continue to be one of the safest bets in the current inflationary environment, as they remain poised to achieve record results for at least the next two quarters.

***Louis is quick to say that he does expect oil prices to moderate, even from today’s prices that are down from June

This will be due to normal cyclicality as seasonal demand ebbs in the fall.

Louis estimates we’ll see prices dip to roughly $85 as we move into September and October. But remember, the core issue for investors is the price of oil relative to the breakeven price at which these giant oil companies operate. And at $85 a barrel, there’s still huge margin for healthy profits.

…Crude oil, natural gas and other energy-related companies should continue to thrive and achieve stunning earnings and sales results.

In fact, FactSet recently reported that the analyst community has continued to increase their earnings estimates higher for the energy sector. The energy sector is now anticipated to report average earnings growth of a whopping 290.3% in the second quarter, up from previous estimates for 219.8%.

The energy sector is also anticipated to report average second-quarter sales growth of 66.4%.

Louis remains so bullish on energy that he just added two new energy stocks in Accelerated Profits. I’m looking at this portfolio as I write, seeing a handful of recent energy recommendations that are already up double-digits.

If you’re a subscriber who missed the two new recommendations, check out Monday’s issue. If you’d like to learn more about joining Louis in Accelerated Profits and getting in on the oil gains, click here.

***Meanwhile, looking elsewhere in the commodities sector, gold is bouncing just as we hoped

After a run earlier this year that saw gold’s price approach its March 2020 all-time high of $2,074, the yellow metal has fallen hard.

In our July 25th issue, we pointed out that this collapse had dropped gold’s price almost all the way to a critical long-term support level. If support didn’t hold, the price was likely in for a much steeper drop, as there was no nearby technical support level.

But if gold rallied, it was likely due for a solid bounce because the selling pressure has been enormous recently.

To illustrate that selling pressure, we highlighted gold’s RSI, which stands for “Relative Strength Index.” This is a momentum indicator that measures the extent to which an asset is overbought or oversold.

When an RSI reading climbs above 70, it typically points toward overbought conditions. When it dips below 30, that usually corresponds with oversold conditions.

When markets become too overbought or too oversold, they tend to reverse dramatically in the opposite direction.

Below we look at gold’s RSI in that July 25 Digest. You can see it was at its lowest readings in three-and-a-half years, well-below the oversold “30” level.

We were hoping such depressed RSI levels would lead to a snap-back trade when the selling pressure finally released.

So, what’s happened since?

We’re getting the snap-back.

The charting service we use has a delayed quote for gold. The yellow metal has pulled back slightly from the price shown in the chart below. That said, gold trades at about $1,760 as I write, which is 3.5% above last month’s lows. Also, be sure to notice the exploding RSI in the lower pane. 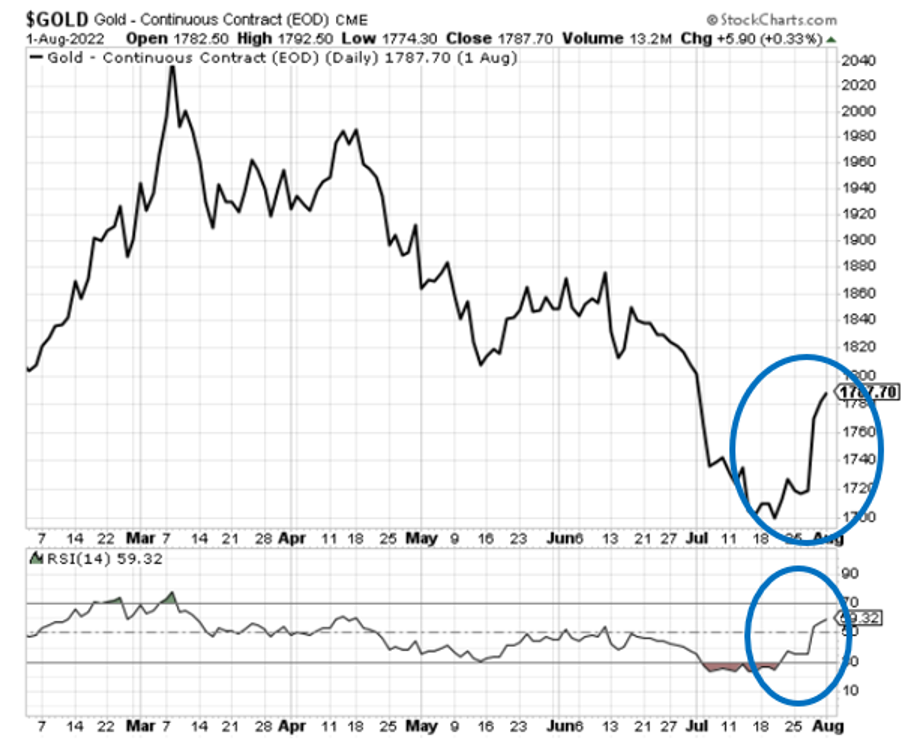 If you want to hop into this gold trade, keep your eyes on two things:

First, gold’s price is currently experiencing its first test since it began this recent rally.

On one hand, this is good. We feel more confident about bullish reversals when we see them tested by the bears, yet the bulls come back in force, keeping the momentum going. In other words, we like to see a pattern of “higher highs” and “higher lows.”

Plus, we would expect a pause after such a sharp move higher. The question is whether that pause will turn into a reversal.

That ties into our second note… Watch the RSI reading. It appears to be leveling off.

If it turns south, suggesting a reversal, we’ll need it to bounce off the mid-reading level of 50. If it doesn’t hold in the top half of the RSI chart, gold’s recent gains could disappear as the yellow metal re-tests recent lows.

But for now, we’re liking this long-overdue bullishness.

***Continuing with our tour around the commodities sector, we’re seeing the same push higher from copper

Only here, the gains have been even bigger.

In that same July 25 issue, we highlighted the recent destruction in copper’s price. After peaking in March, it fell 35% through mid-July.

But since then, “Dr. Copper” has rebounded roughly 10%, pushed higher by its own climbing RSI. 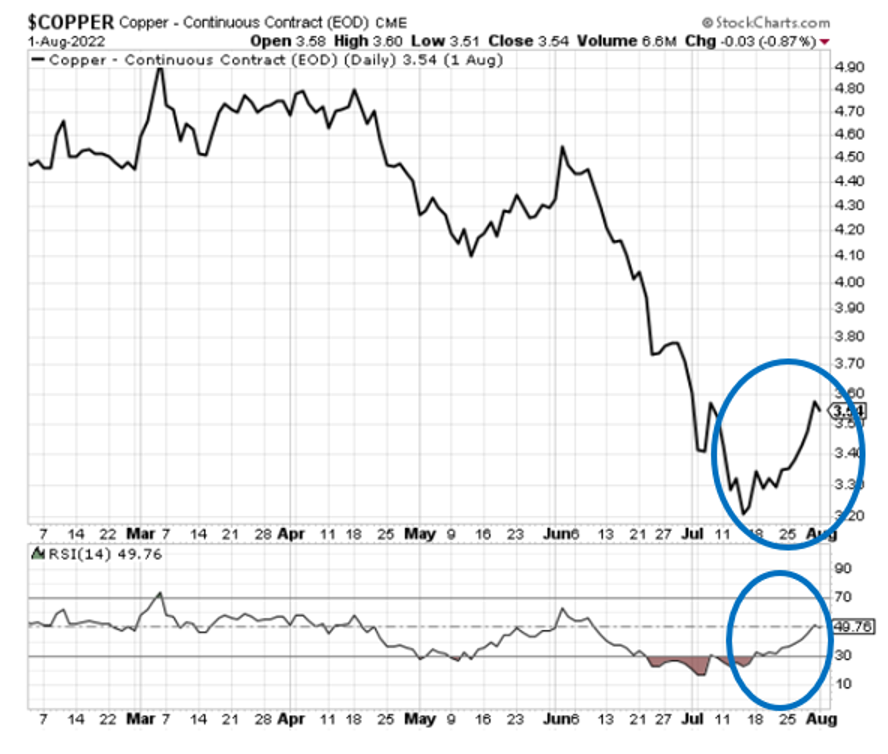 It turns out, Louis added a peripheral way to play copper to his Accelerated Profits portfolio at the beginning of the year — Commercial Metals Company (CMC).

As copper has surged 10% from its recent low, CMC has exploded 20%.

This dividend equates to a yield of about 1.4% at today’s price. Getting paid to own an in-demand industrial metal…not a bad deal.

***As we wrap up, let’s return to Louis’ Acclererated Profits issue to get his thoughts on where the market goes next

First, Louis has encouraging news: He points toward institutional investors that have been bargain hunting recently, using dips in the wake of weaker-than-expected results as good buying opportunities.

Regular Louis-readers know that following these big-money players is a great way to get a bead on market direction.

As to what happens next for stocks next, here’s Louis with the final word:

Looking forward, I anticipate that Wall Street will grow laser-focused on companies that are able to maintain strong earnings and sales momentum, as inflation is anticipated to continue to be a major headwind for many companies.

In other words, the stock market will narrow in the upcoming weeks and months, with investors focused on fundamentally superior stocks.