Rivian Automotive Is Finally at a Price Investors Can Take Seriously

Rivian Automotive (NASDAQ:RIVN) stock has not done well lately, but what stock has?

If it’s growth-related, it’s been under pressure. RIVN stock is no exception, down 63% from the highs.

At the lows, shares were down 72% from the all-time high. That’s a pretty big pullback and even for someone who’s bearish — I was one of them — we have to stop and take a look.

My qualm isn’t with Rivian necessarily, it’s with the valuation and over-exuberance that bulls were giving to growth stocks.

At the end of the day, Rivian is an aspiring automaker. It’s not a high-margin, SaaS tech company or something that has historically demanded a high valuation.

In fact until recently, automakers received a dirt-cheap valuation.

My other qualm with this stock is simple: Competition.

Electrifying that vehicle is being met with tremendous excitement, highlighted via a long backlog of reservation.

Then you throw in Tesla’s (NASDAQ:TSLA) Cybertruck and General Motors’ (NYSE:GM) electrification of its pickups. Now all of a sudden Rivian isn’t the only game in town.

That’s not to say it won’t succeed — and please don’t misconstrue my intentions — but this is the root of what was bothering me the most: “At its opening price, Rivian is already worth more than automakers Ford and GM.”

With effectively no revenue at the time, in what world did that make sense?

According to a recent 13F filing, Soros Fund Management took a stake in Rivian to the tune of ~$2 billion. For what it’s worth, the fund also took a small stake in Peloton (NASDAQ:PTON).

Here’s the thing with 13F filings, though. First, they represent the previous quarter and second, they are not timely at all.

While the fund bought about 20 million shares of Rivian for about $2 billion, that stake is worth about $1.2 billion today.

Furthermore, we have no idea what the fund has done since. Did it stop out at some point in January? Did it double down on the position?

We have no way of knowing. So while it’s interesting the fund is buying RIVN stock, we have no idea what the current position is. And based on that, it’s hard to follow.

On the plus side, prospective buyers have seen the price come down considerably. For current longs, that’s disastrous and unfortunate. Believe me, I am there too with a few of my longer-term growth holdings.

On a valuation basis, I find the stock a bit more palatable after such a big decline. Yet, it’s still far cheaper to go with well-established names like Ford and Tesla.

Given the bear market, we’re seeing in growth stocks as well, it makes it even harder to pull the trigger on a long position.

If you absolutely love a growth stock, then by all means feel free to start accumulating. For me personally though, RIVN stock doesn’t fit that observation for me.

RIVN and the Charts 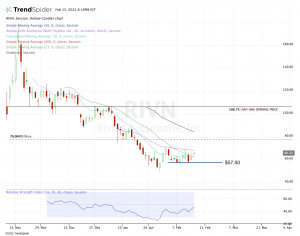 Beyond the valuation and a larger attraction to more well-established automakers, the chart has hurdles too.

While $58 has been support, the declining daily VWAP has been resistance.

Longs who love this name may consider being long against $57.50. That at least contains some of the risk. Below that level and last month’s low could be in play at $50. Continued selling below $50 could put the low $40s in play.

On the upside, RIVN stock needs to clear the daily VWAP measure. Above that opens the door to the $69 to $71 area and if shares can clear that hurdle, the $78 IPO price is within reach.

Above that could open the door to the 50-day moving average.

The post Rivian Automotive Is Finally at a Price Investors Can Take Seriously appeared first on InvestorPlace.