To what extent will the Russian invasion impact inflation and the risk of recession? … how Luke Lango sees these issues resolving… discounted prices on tomorrow’s market winners

Planes and missiles attacked a number of cities, and not just in the areas close to Russia. For example, the city of Lutsk was hit. It’s in the northwest corner of Ukraine, closer to Poland than Russia.

The Ukrainian government is calling it “a full-scale attack from multiple directions.” Reports suggest the loss of life is already in the hundreds.

Here’s a map showing some of the targeted cities, though dozens have been hit.

***The reaction in the investment markets was extraordinary

In the morning, assets reacted as you might expect. The broad stock indexes were down substantially while Bitcoin and cryptocurrencies suffered steep losses.

Meanwhile, bonds, gold, oil, and a handful of other commodities like wheat and nickel surged.

But by the afternoon, it was a different story. All three major stock indexes staged a massive rally, with each closing in positive territory. Most impressively, the Nasdaq ended the day up more than 3%. 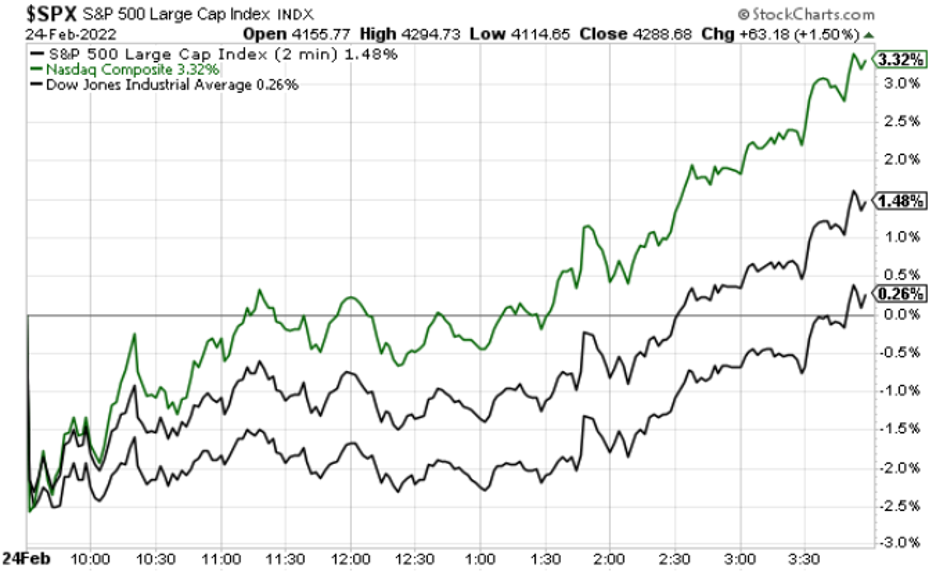 On the other hand, gold gave back its gains while Bitcoin and altcoins staged a furious rally.

Even oil saw a reversal, selling off into the low $90s after topping $100 a barrel this morning.

***Returning to the invasion, what happens now?

At the moment, there aren’t signs that a resolution is near.

Analysts believe Russian President Vladimir Putin wants a reunification of original Soviet Union territories, which include Ukraine. At a minimum, Putin seeks to prevent Ukraine from joining NATO, which has been appearing more likely in recent years.

So far, western governments have responded to Russia’s attack with sanctions. But leaders find themselves in a Catch-22.

The number-one way to hurt Russia would be by targeting sanctions at Russia’s key export – oil and gas. However, Russia is a major supplier of energy to Europe, responsible for more than one-third of Europe’s energy needs. So, hitting Russia’s oil and gas exports would send shockwaves through Europe’s economy.

Meanwhile, here in the U.S., oil prices have been in a steep inflationary uptrend for months. Sanctioning Russian oil would only exacerbate the problem, hurting U.S. consumers.

…the toughest sanctions on Russia — those that might actually alter Putin’s behavior — would also imperil the U.S. and global economies, already beset by surging prices for oil and other commodities.

The coming quarters were already murky when it comes to interest rate hikes, the investment markets, inflation, and growth. But Russia’s invasion into Ukraine now introduces a new uncertainty – the risk of a recession.

In yesterday’s issue of Hypergrowth Investing, Luke Lango addressed this fear and offered a roadmap for what he sees coming.

Let’s pick up with Luke discussing what the invasion means for global inflation:

The U.S. Federal Reserve, alongside most other central banks across the globe, has made it priority number one to fight inflation.

If inflation accelerates at the hands of spiking commodity prices, that could cause the Fed to move more aggressively in its tightening process.

This potential for more aggressive tightening is what introduces the risk of a recession.

Higher interest rates are a bit like a chemotherapy cancer treatment. Yes, the chemo kills the cancer, but it also kills the surrounding healthy cells too.

In a similar way, yes, higher rates tamp down inflation, but they also threaten to kill off business spending and economic growth.

If the Fed hikes rates into a slowing economy, it increases the risk of stagflation and a recession.

The market is growing fearful of this outcome.

Remember: A flattening yield curve is indicative of a bond market that believes an economic slowdown is on the horizon, while an inversion has preceded every economic recession in the U.S. over the past 50 years.

We’re flattening quickly right now, and are not too far off from an inversion.

To make sure everyone is following along with Luke’s point, in normal times, the longer you tie up your money in a bond (we’ll say the 10-year Treasury), the higher the yield you would demand for it.

The yield you’d want would certainly be higher than what you’d expect from a short-term bond (the two-year Treasury). After all, locking up your money for just two years gives an investor far more financial flexibility than locking up that money for 10 years.

Given this, in healthy market conditions, we usually see a “lower-left” to “upper-right” yield curve. That would translate into a sizeable “10-2 spread.”

As Luke pointed out, a flattening yield curve, which means a narrower 10-2 spread, reflects fears of an ailing economy. And an inverted yield curve has a perfect record of predicting a recession for the last half-century.

So, how is Luke assessing the risk of a full-on recession?

Back to his update:

While we believe these recession fears are partially justified, we also believe that they are being overstated at the current moment.

That is, we do not believe that economic sanctions against Russia as a result of the Ukrainian invasion will result in a significant or prolonged spike in energy prices, or that inflation pressures will rise over the next six months as a result of the invasion, or that the Fed will move more quickly.

***Could oil prices and inflation actually fall after the kneejerk spike?

Why is Luke optimistic about the direction of oil prices and inflation despite the Russian invasion?

He tells his readers that the last time the Western world imposed significant economic sanctions on Russia was during the invasion of Crimea in February and March of 2014.

The sanctions resulted in a big near-term spike in both energy prices and inflation – but that spike proved to be short-lived.

From mid-2014 to early 2015, commodity prices actually plunged while inflation — as measured by the year-over-year rise in the U.S. Consumer Price Index — dropped to zero.

In other words, the last time the Western world imposed significant economic sanctions on Russia, it preceded a prolonged period of plunging energy prices and decelerating inflation.

To be clear, Luke isn’t predicting the exact same outcome this time around. But his point is that economic sanctions on Russia are not a material driver of energy prices or inflation in the medium- or long-term.

And though today’s price action shouldn’t be taken as perfect foreshadowing of what’s to come, it is interesting that crude futures have pulled back from $100 a barrel this morning, to about $93 as I write.

Let’s jump back to Luke’s update:

We expect inflation trends over the next 6-plus months to be determined by supply chain disruptions and consumer demand.

The Russian invasion of Ukraine will not significantly impact either of those, and where it does have some impact — perhaps lower consumer spending due to waning consumer confidence — it will actually help decelerate inflationary pressures.

Luke writes that the bigger impact on inflation will be the global shift from “eliminate Covid” to “live with Covid,” which will alleviate supply chain problems.

As that plays out, Luke sees inflation decelerating, even if Russia fully annexes Ukraine.

***Is this a buying opportunity?

Before finishing his update, Luke points toward the market’s current valuation. At 18.8X forward earnings, it’s now roughly in line with its five-year average forward earnings multiple. Meanwhile, even though the 10-year Treasury yield has shot up, it’s still below 2%. And in the wake of last night’s attack, it’s fallen further, at 1.93% as I write.

Put it together, and that’s still an attractive valuation set-up for stocks as long as earnings remain healthy.

But there’s one corner of the market that Luke sees as offering the best return potential:

We believe the buying opportunity is especially attractive in hypergrowth tech stocks, because they’re dirt cheap relative to their long-term growth potential and that growth potential does not at all rely on a good geopolitical situation in Eastern Europe.

We’ll bring you more details on opportunities in tech in the coming days.

Wrapping up, yes, the Russia/Ukraine conflict could make inflation worse in the near-future. But as Luke noted, history suggests it won’t be a long-term driver of inflation.

As for the broader investment markets, expect volatility in the immediate future but today’s bounce was extraordinary. And there are great buying opportunities right now, especially in the tech sector as Luke pointed out.

We’ll keep you up to speed here in the Digest.