Technology Is Moving Fast – Should Your Investments?

“Can Elon Musk save the internet?”

I asked this question a couple of weeks ago after the island nation of Tonga lost all internet services from a volcanic explosion.

Although it was a bit of a tongue-in-cheek question, Musk answered a couple of days later:

According to Tonga’s attorney general, SpaceX now “has a team in Fiji establishing a station that would connect Tonga via its satellite-internet service Starlink.”

The details of its progress haven’t been shared yet. But the overall goal would be to connect Tonga to Starlink’s “constellation” of approximately 2,000 satellites that currently orbit earth. This would allow Tonga to connect to the internet without relying on vulnerable underwater sea cables that currently make up 99% of the world’s internet traffic.

As a venture capital investor, I find this story amazing:

Then one of the world’s richest men, who helms some of the most cutting-edge companies, steps in to work on reconnecting the island to the global communication hub…

All in less than a month.

That’s the story that many investors are missing today:

Our world is changing and transforming at an increasingly faster pace than ever before.

On one hand, this is extremely exciting.

New technologies are being developed faster than most of us realize. And it’s resulting in significant changes to our lives.

Everything from the way we consume information to how we actually work has drastically transformed over the past couple of years.

On the other hand, these changes are also causing a lot of conflict…

These changes are causing conflict in the literal sense, as we see political and social clashes increase.

But it’s also true in the personal sense, as individuals feel less certainty with the direction of where their future is headed.

This uncertainty has caused many investors to abandon traditional investing strategies and lose sight of long-term business-building strategies. Instead, emotions are taking over, which, in turn is fueling short-term investment behavior.

During the ongoing pandemic, investors are holding stock market investments for a record-low period of time: just five and half months. 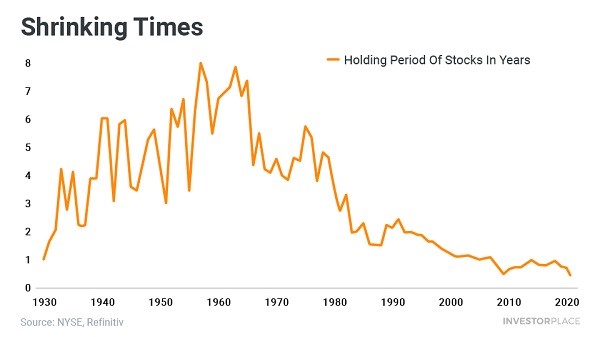 Holding public equities for such a short period can certainly be profitable when executing specific trading strategies… but that applies to only a very small sector of the investing community. (Think hedge funds with serious capital, large teams of analysts, and proprietary trading tools.)

This trend of buying and selling stocks quickly has most recently been highlighted by the wild volatility of Cathie Wood’s ARK Innovation ETF (NYSEARCA:ARKK).

“In the three weeks since the start of 2022, en route to a steep overall decline, ARKK’s price on average careened by an astonishing 6.5% between its high and low for the day. On Jan. 24, for example, it swung by 13.2%, and on five days covered 8% or more from bottom to top. By contrast, Bitcoin varied by a daily median of 5.1%. Hence, ARKK was one-quarter more volatile than just about the most fickle play in the investment world.”

Although many are critical of Wood’s strategy and the actual fee structure of ARKK, the fund itself has a pretty clear objective: to “seek long term growth” by targeting “disruptive innovation.”

Despite the fund’s long-term strategy, investors withdrew $352 million in one day in mid-January, proving the market’s distaste of sticking with investments for the long-haul.

In response, Cathie Wood has announced a new product: The ARK Venture Fund.

As reported by Bloomberg:

“The ARK Venture Fund will follow the same ‘disruptive innovation’ investment theme as the famous ARK Innovation ETF (ticker ARKK), but target ‘illiquid securities and securities in which no secondary market is readily available, including those of private companies,’ the filing said.”

“The fund is structured with lock-up provisions that will help the famous Wall Street manager to keep more control over investor cash moving in and out of the strategy.”

The lock-up provisions will only allow investors to pull money out on a quarterly basis, and that amount will be limited based on total fund redemption demands.

Cathie Wood has essentially been trying to replicate venture capital-style investing through her ARKK ETF. Although she is targeting public companies, the strategy of targeting disruptive technologies is akin to how venture capitalists pursue investment opportunities.

However, the wishy-washy behavior of public market investors has hammered the ARKK ETF (currently down more than 50% from its highs).

These public market investors were expecting huge gains in a short amount of time. In times of volatility, it makes sense they are quick to exit.

So, in response, Wood is launching a product that limits the ability of investors to buy and sell the investment vehicle that she and her team are managing. The intention is to prevent investors from making rash decisions. It requires them to hold on through the ups and downs.

The assumption is that over the long haul, everything will be great.

The recent poor performance of the ARKK ETF has brought Cathie Wood into the spotlight.

However, erratic investor behavior is what should really be the center of conversation.

As a venture capitalist, this should be a glaring example of how the market works…

Investors who are seeking outsized returns must pursue strategies that the crowd avoids.

Instead of patiently investing their capital over the long haul in well-run, innovative companies, the crowd generally pursues emotionally driven investment strategies.

Innovators like Elon Musk have opened the door to whole new ways of thinking.

Unbelievable transformations that are happening around the world.

It’s an exciting time to be alive!

But the best, most profitable investments take time to develop.

Like Musk’s Tesla (NASDAQ:TSLA), founded in 2003. The company’s first car, the Tesla Roadster, wasn’t available until five years later in 2008. When Tesla hit the public markets in 2010 (seven years after its founding), the stock opened at $17 a share with a valuation of $226 million and the promise of an affordable electric vehicle…

Fast forward to today, and Tesla sports a $961 billion market cap. Elon Musk is the richest man in the world. But the 19 years since its founding have not been a steady ride up…

In fact, Tesla didn’t have its first profitable year until 2020… 17 years after its founding.

The most successful investors act with patience, not short-term emotion.

Do your research; trust your gut.

Then you can be confident in your portfolio and sleep soundly. No need to stress about the short-term noise.

The post Technology Is Moving Fast â€“ Should Your Investments? appeared first on InvestorPlace.

The Shiba Inu Bounce Back May Be Just Temporary