The 3 Ways to Win During a Recession
Advertisement

This article is excerpted from Tom Yeung’s Moonshot Investor newsletter. To make sure you don’t miss any of Tom’s picks, subscribe to his mailing list here.

On Tuesday, I unveiled Tom Yeung’s Profit & Protection, a newsletter set to launch next week.

A preview of the letter — How to Make Money Without Really Trying — took a good look into the Perpetual Money Machine Strategy. It’s a blueprint for finding high-quality stocks that can turn $10,000 investments into millions of dollars.

It’s the “Profit” part of Profit and Protection.

Today, we’ll take a closer look and consider the “Protection” part of the newsletter. When markets are in free-fall, investors also need to learn defensive plays without the fear of missing out on a rebound.

Once again, if you want to continue receiving these emails, please click here to sign up for Tom Yeung’s Profit & Protection launching next week. And if you’ve already joined, then thanks! You can expect your first copy on May 24.

In the meantime, please enjoy another preview of Tom Yeung’s Profit & Protection.

The 3 Ways to Win During a Recession 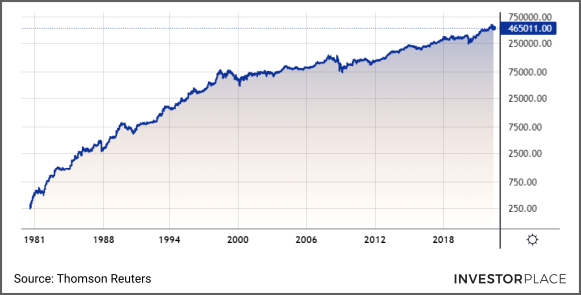 The 2022 drawdown barely registers on the graph of this magical firm. In fact, the Covid-19 pandemic and 2000 tech crash both look like minor bumps along the way.

The company, of course, is Warren Buffett’s Berkshire Hathaway (NYSE:BRK-A), a conglomerate of high-performing industrial and financial firms rolled into a neat, Omaha-based package (with some Sees’ Candies on top). It’s a company that’s withstood war, inflation and recessions to become one of the stock market’s all-time best performers.

Yet even Berkshire has off days. In 2008, BRK’s share price dropped 32% during the financial crisis. And in 2001, Mr. Buffett’s firm lost 6% of its equity value after the September 11 attacks triggered massive insurance payouts. Removing those down years would have tripled the return for Berkshire investors.

Today, investors face similarly depressing prospects of potential losses. Interest rates have barely increased to 1% and stock markets are already suffering a prolonged bear market. Even Berkshire Hathaway has dropped 10% in less than a month.

So, how should we invest during a recession?

Option 1: Diversify Out of U.S. Stocks

What if I told you that you could earn 9.62% in guaranteed income? Backed by the full might of the Federal U.S. Government, no less.

But that’s what Series I bonds now yield. Abnormally high inflation in April has turned these inflation-indexed bonds into some of the best-returning assets on the market.

Growth in these bonds reflects the importance of diversification. By dividing savings across multiple asset classes, investors give themselves room to absorb market shocks and double down on cheap plays during recoveries.

The U.S. stock market makes up only a tenth of the world’s wealth. Remember that when deciding how to divide your assets.

Meanwhile, investors still have plenty of recession-resistant options in the market. According to a study by Fidelity, consumer staples and utilities beat industrials and tech by 20% or more during recession cycles. 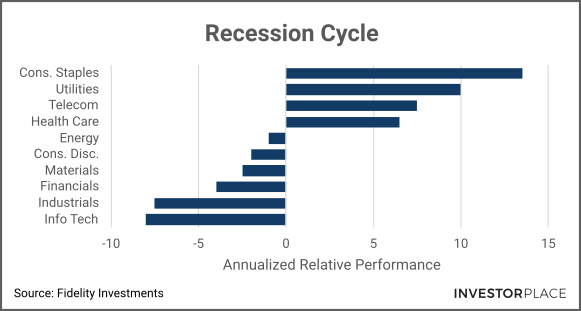 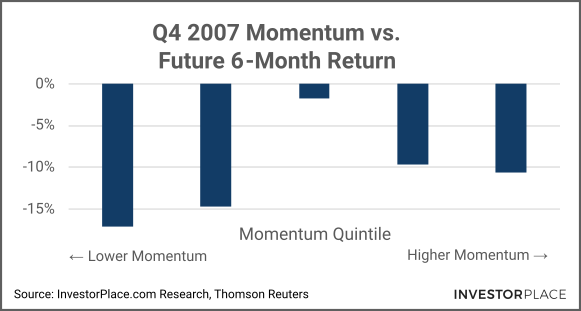 In these cases, it’s not the highest-momentum companies that do well during recessions. Surprisingly, neither is it the “buy-the-dip” laggards.

Instead, it’s the middling stocks that do best. These companies, which averaged a -2% return in Q4 2007, would emerge from H2 2008 largely unscathed from the stock meltdown.

That has immense implications for today’s market. Rather than buy rocketing energy stocks or slumping tech ones, traders today should focus on humdrum companies in staples, utilities and telecom.

Consider AT&T (NYSE:T), a telecom firm currently with one of the highest dividend yields of any large-cap firm.

Since February, shares remained in a 10% trading band, a good sign of a middling company. AT&T is also part of the telecom sector, an area that has historically outperformed in recessions.

And the best part? AT&T has a hidden catalyst:

In 2020, rival T-Mobile (NASDAQ:TMUS) completed its merger with Sprint, reducing the number of telecom providers in the U.S. from four to three. Investors ought to celebrate (even if consumers will ultimately face higher prices).

It’s a story that long-term investors have seen before. Airlines… ammunition… tobacco… Any time an industry with high regulatory barriers turns into a three-way oligopoly, markets quickly become “irregular,” as one study puts it.

Today, mobile phone users are beginning to see the impact of the Sprint/T-Mobile merger. The cheapest phone line from T-Mobile now costs $60 per month, reversing years of declining prices. Even AT&T — a firm panned for its mismanagement of WarnerMedia — now expects operating earnings to rise 5% annually from 2023 onwards.

These are the kinds of investments that power quant-based strategies. AT&T flies under the Wall Street radar with a cheap 6.7x P/E and 12x EV/EBIT valuation — around 30% lower than its long-run average and less than half of T-Mobile’s price tag. And if quant-based investing is a guide, companies like “Ma Bell” will outperform as America begins its recessionary cycle.

Today, many beaten-down tech stocks look like Netflix in 2008. Desktop Metal (NYSE:DM), a firm profiled in The Moonshot Investor, now trades within a spitting distance of its $1.50 estimated acquisition value. And firms like XL Fleet (NYSE:XL) have become so cheap that their market capitalization is less than the cash they have on hand.

Not every Moonshot bet will survive an impending recession. Poorly-capitalized firms will find it harder to raise cash, and weaker players will fold. And competition tends to weed out overcrowded markets; it’s hard to see how all 26 electric vehicle makers will survive.

Still, many promising firms have become cheap one-sided bets on a brighter future. Those willing to kiss a few frogs and lose money in the short term will be rewarded when markets eventually return to growth.

Bottom Line: Today’s newsletter adds AT&T to the “Profit & Protection” buy list for its low price and catalysts for re-rating.

Picking the Bottom of the Market

“That’s it, I’m done,” an exasperated friend told me over the weekend. “Markets are too depressing to keep going.”

In a sense, he’s right. We’re barely in the late-cycle economic stage, and people are facing losses not seen since the 2008 financial crisis.

Bubbles everywhere are popping all at once.

Those attempting to “buy the dip” have also been disappointed. Shares of high-growth companies from Sea Ltd (NYSE:SE) to Cloudflare (NYSE:NET) have dropped by over half. Rising rates and high valuations mean stocks still have further to fall. 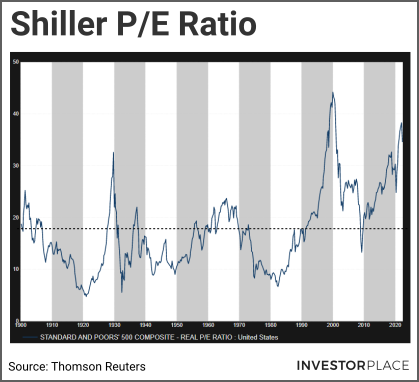 Yet seasoned investors have all been here before. And those who prepare for an upcoming recession will have the dry powder to invest when valuations finally bottom out.

The post The 3 Ways to Win During a Recession appeared first on InvestorPlace.

6 Cryptos to Buy Now and Hold for the Long Term

Dear Zcash Crypto Fans, Mark Your Calendars for a Huge Upgrade on May 31