The Value of Living Longer

There are few things more annoying than someone telling you, “I told you so!”

This is especially true in the world of investing.

Even so, this is one of those times I am going to tell you “I told you so…”

This Biotech Trend Is Going to Be Huge

I’ve said it before, and I’m going to say it again:

“Investing in longevity is going to be one of the biggest investment trends we’ve ever seen.”

And right now we’re at a very important inflection point in this biotech trend. Here’s why…

Most investors don’t even know what is happening in the world of longevity.  Many are unfamiliar with the science being developed to make living longer — much longer — possible.

We can use this lack of awareness to our advantage.

Similar to being an early adopter of the internet or cryptocurrencies, being aware and informed about the longevity biotech trend will enable us to make early investments that could turn out to be massive winners.

Additionally, because we are at the early stages of the longevity investing trend, it’s highly likely that several existing private companies will grow into multi-billion-dollar behemoths within the next decade.

The opportunity to invest in the next “Apple of Longevity” is likely right in front of us (and it’s what I’m currently hunting for).

The second factor that’s helped the longevity sector reach an inflection point is funding. A massive amount of money has already flowed into private companies researching life-extending technologies… and there is about to be much, much more.

Where the Billionaires Put Their Money

In 2022, there has only been one disclosed deal in the world of longevity startups…

This singular deal is over 10x larger than the total of all last year’s 37 announced funding rounds across the entire industry.

In 2021, it was announced that billionaires Jeff Bezos and Yuri Milner had funded a longevity startup called “Altos Labs.” At the time, not much was known about the company. Its website wasn’t even active.

Now Altos Labs has come out of obscurity, revealing a stacked team of big industry names and a massive funding round of $3 billion (that’s the funding of the company, NOT the valuation, which wasn’t announced). 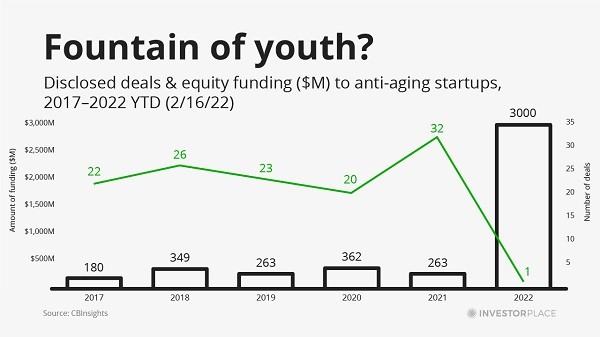 It’s difficult to explain the importance of this news. Altos Labs and its backers have essentially sidestepped all traditional venture capital funding trends.

Instead, the company has simply filled its coffers with an enormous amount of money and hired some of the most qualified people in the world to fight humanity’s biggest problem: growing older.

While Altos Labs’ burn rate (the amount of money they use every month) has not been disclosed, it’s likely that $3 billion will last them several years. This will enable the company to do heads-down work, without the concern of constantly raising new funding rounds (which is often a huge distraction for entrepreneurs).

Although Altos Labs may be the best-funded longevity startup, that doesn’t mean that there isn’t competition…

While this specific discovery may sound obscure, it’s important to note that this entire process was completed in 18 months on a budget of $2.6 million. That’s a fraction of the cost and timeframe that it normally takes to discover new drugs.

Even more impressive is that ISM001-055 is now in human trials. That means that Insilico has not only identified a new molecule, but is also actually testing it in humans. 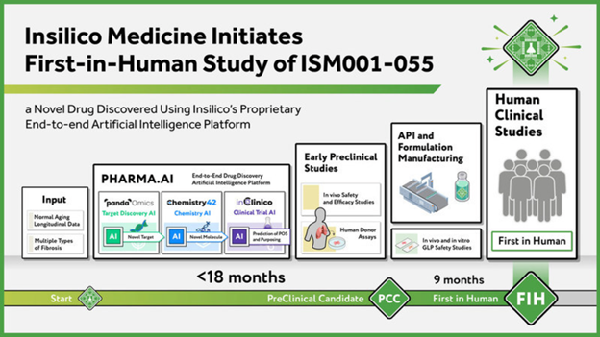 Historically, it takes over 10 years and $2.6 billion to develop one new drug and bring it to market.

With the use of AI to discover and develop new drugs, the timeline (and budget) for eventual human use can be dramatically reduced.

And that spells massive opportunity for investors who grab a share of the longevity sector now.

More companies are being founded with large investments like Bezos’, and the actual cost and timeline of developing drugs is declining.

This is a perfect setup for startups to blossom into enormously valuable companies.

The post The Value of Living Longer appeared first on InvestorPlace.