Twilio Stock Has Disaster Stats, But It Also Has Great Potential

We shouldn’t judge a book by its cover, so we shouldn’t judge a company by its stock chart either. Twilio (NYSE:TWLO) has been declining for a year, but it’s still a solid investment opportunity. From its peak last February, the stock has lost more than $200 per share. That’s a drop that cost it around 60% of its value. TWLO stock is clearly out of favor, but I contend that this is a mistake. The drop has more to do with meme-trader mentality than special issues ailing the company.

From the stock chart alone, one would think that Twilio’s business is dying. However, that is actually far from the truth, since its financial metrics tell a bullish story. The company has five-year average sales growth of around 60%. The numbers are equally as impressive in gross profits. This growth rate suggests that management is executing on plans almost perfectly. The company still loses money, but at this stage investors should give it a pass. Those who sold Amazon (NASDAQ:AMZN) or Tesla (NASDAQ:TSLA) for excessive spending missed out.

Net income profitability is one way to measure value. But when studying ultra growth companies, it’s more appropriate to use sales metrics. The TWLO stock prices-sales (P/S) ratio is under 12 and around 25% cheaper than Tesla. Value is not the reason the stock is falling. Rather, sentiment is.

Right now, investors just lack the courage to step up and buy TWLO stock. Even the experts on Wall Street have not given up on it.

TWLO Stock Is a Buy 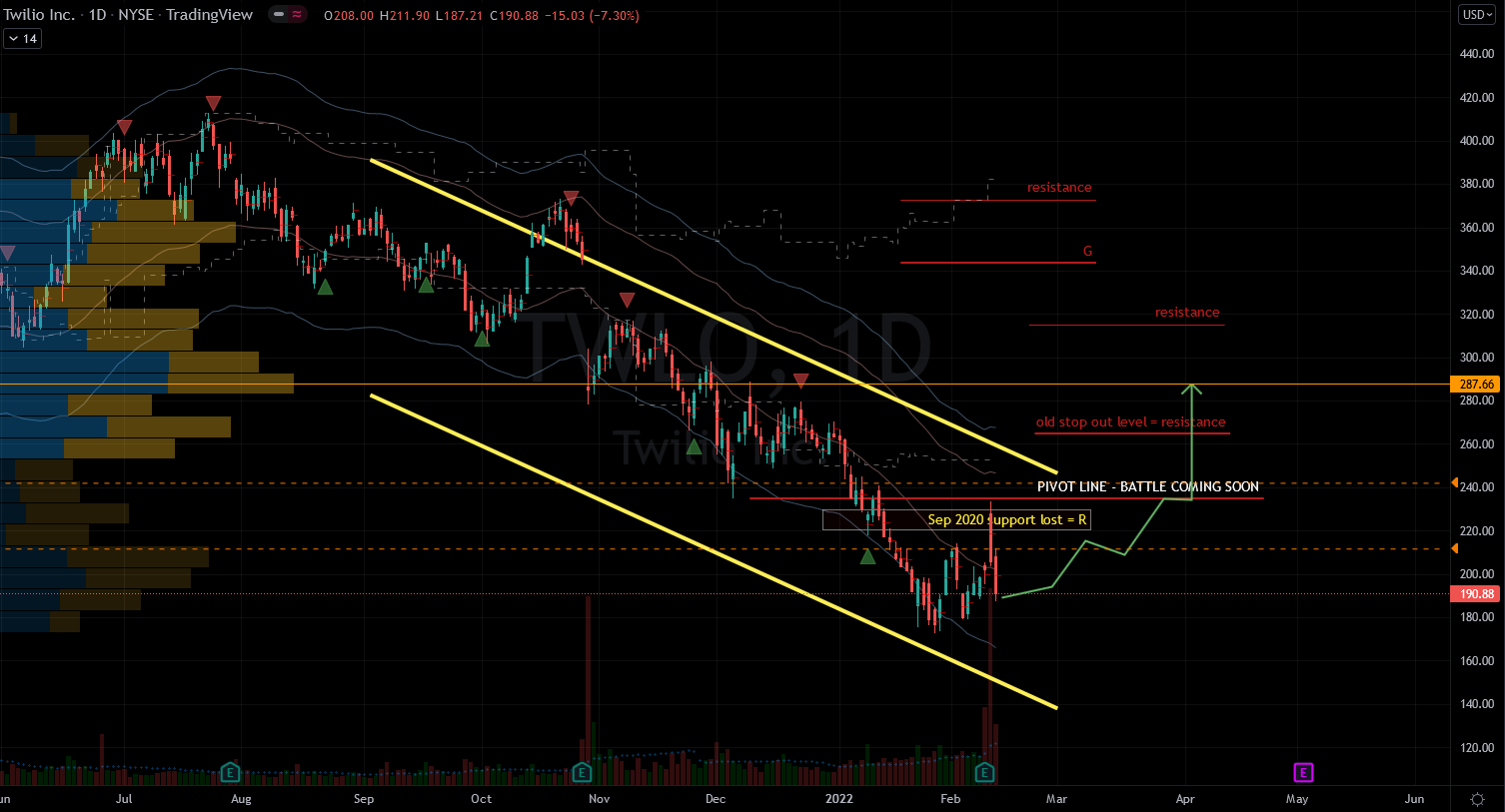 According to Yaho0! Finance, most analysts say this name is a buy. Additionally, their average price target for TWLO stock is $354 per share. However, the stock currently sits 19% below even their lowest price target of $240. Clearly, these analysts also see upside like me, but first markets need to get their courage back. Their rating suggests owning it for the long term, but not all in at once. Oddly enough, $240 per share is a big resistance level. But that’s also a place where the bulls can ignite a rally if they can overcome it.

There was some hope last week for Twilio as the stock spiked on an earnings headline. The company delivered another solid one and guided well, at least versus expectations. The after hour party was huge as a result. However, you had to be quick and book profits. Sadly, the jubilation lasted mere hours. Why? Because the next day, a calamity unfolded.

To add to the woes, Affirm (NASDAQ:AFRM) also botched the release of its earnings report. Even though it is a small company, the debacle caused small-cap momentum to stall. TWLO stock has been trading along the group for weeks. They were the only index hanging on to green and they too ended lower into the week.

But therein lies a bit of hope: the small caps actually eked out a green week, which makes three in a row. Maybe investors are in the process of rotating back into them. This is important because then we could assume that traders would not be net sellers of stocks. Selling A to buy B could keep this bull run alive.

As for the Bullard tape bomb, it’s not actual bad news. Bullard cannot make policy alone, so it’s only one man’s opinion. Nevertheless, his words opened the door for a bearish scenario where the Fed goes crazy with rate hikes. They did this in late 2018 and the markets punished them by crashing into Christmas. Fed Chair Jerome Powell had to restart his quantitative easing (QE) back then, which he is unwinding now.

Today, they should shed some light on the hornet’s nest that Bullard stirred up. There is no point in leaving everyone in limbo. The Fed has been loose with the speeches, so why not just tell us the truth. It’s not that hard to say it: “We are not going to purposely break the economy we just fixed.”

Based on fundamentals alone, TWLO stock is one to hold long-term. Meanwhile, short-term investors have to account for foolish political rhetoric about wars and rate hikes. I’d leave room for error and don’t go all in because of that.

On Wednesday, the Fed will release the minutes from their last meeting. Even though these are past events, I bet the media will make a mountain out of them. Also, plenty more Fed headlines are coming this week. At some point, we will go back to trading fundamentals and actual results. For now, though, investors have to adjust to being hostage to the headlines.

On the date of publication, Nicolas Chahine did not hold (either directly or indirectly) any positions in the securities mentioned in this article. The opinions expressed in this article are those of the writer, subject to the InvestorPlace.com Publishing Guidelines.

The post Twilio Stock Has Disaster Stats, But It Also Has Great Potential appeared first on InvestorPlace.