What Is Ethereum, How Many Are There and Where Is the Price Going?

The crypto market has been somewhat mixed so far this year. At times, it looks like Bitcoin (BTC-USD) and Ethereum (ETH-USD) are going to lead us out of the current volatility. At other times, they look to only be adding more pain to investors’ portfolios.

It hasn’t been a fun environment for growth, tech and crypto investors. For its part, Ethereum is down 48% from the high it made in November. Bitcoin is within a few basis points of that performance as well.

Clearly these two have held up better than some of the smaller cryptocurrencies that have come to life over the last few years.

Despite the volatility, I believe that Bitcoin and Ethereum will survive the current bear market. The only problem is, no one knows when they bottom or at what price. That hasn’t stopped investors from asking questions, though.

Bitcoin and Ethereum Are Different

Ethereum and Bitcoin are sort of like a Venn diagram. They have key differences that make them unique from one another, but they also have qualities that overlap with each other.

For instance, both are blockchain-based digital currencies that can be used to buy and sell goods, and send to other users. However, they operate in different manners as Ethereum is shifting to a proof-of-stake concept. That means:

Ethereum plans to shift to a proof of stake model, where users can only validate transactions according to how many coins they hold, rather than the energy-intensive mining rigs used now.

On the other hand, Bitcoin is based on a proof-of-work concept, which is a “competitive approach to verifying transactions” and is the original framework for verifying cryptocurrency transactions.

Another major difference? The amount of available coins. Bitcoin is capped at 21 million coins and there are already almost 19 million mined. In other words, about 90% of all available Bitcoin is already mined.

So how many Ethereum are there? There are currently more than 119 million Ethereum in existence. However, that’s where Ethereum’s shift to a proof-of-stake concept comes into play, as “upgrades are being made that will eventually eliminate the need for miners altogether.”

Aside from being sent to other users, Ethereum can also be used to buy and sell goods. In fact, Ethereum is actually a faster transaction than using Bitcoin.

While Ethereum may be a bit more functional in the real world, both cryptocurrencies act as a store of value. That is, both coins are purchased in investors’ respective currencies (dollars, yen, euros, etc.) and have appreciated against their prior prices. At least, historically speaking.

However, Ethereum has other features. It’s fueling the NFT market at the moment and it’s also capable of smart contracts. That is, unlocking portions of payment when certain milestones are achieved.

Where Are Ethereum Prices Heading? 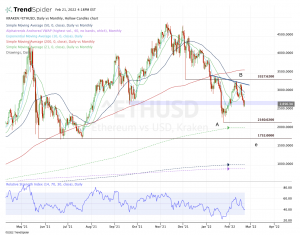 Now that we’ve cleared up some of that, what does the chart look like for Ethereum?

In January, Ethereum broke below the 200-day moving average and the December flash crash low near $3,325. After bottoming near $3,000 and bouncing, this area was resistance.

That was the first real clue that things were turning south; it marked a true change in character. A change that went from buying the dips to selling the rips. Since then, we’ve seen $3,300 act as resistance as Ethereum continues to put in a series of lower highs — another bearish sign.

I do believe Ethereum and Bitcoin will survive, but that doesn’t mean they can’t go lower in the meantime.

If Ethereum can find its footing in the $2,500 to $2,750 area, then it’s possible we could see a higher low form. However, until Ethereum can snap that downtrend streak and reclaim its short-term moving averages, it’s hard to be too trusting of a long position.

If the selling continues, we’ll have to keep that possibility in mind in regards to where the “C leg” low could come into play.

The post What Is Ethereum, How Many Are There and Where Is the Price Going? appeared first on InvestorPlace.

The Excitement Is Over for GameStop Stock