Many blockchain investments are headed for… big trouble.

Look, I’m not jumping on the “blockchain is overrated” bandwagon. In fact, I am extremely bullish on blockchain technology and all the ways it can change our world.

Most of the U.S.’s legacy information infrastructure — especially government records systems — are extremely outdated and ripe for an overhaul. Blockchain technology will change everything from international payments to property records, all the way to personal identity security.

People’s behavior is the problem. It’s extremely difficult to change the way people behave in a short amount of time. This was especially evident during the dot com bubble, when investors thought that internet companies would take over the world.

Investors were right… it’s just that they were about 20 years too early.

Lessons From the Dot Com Bubble

We only have to look back 22 years to see where many blockchain investments may be headed.

Let’s take a look at the timeline of the dot com bubble:

The dot com bubble was fueled by investors’ expectations that consumers would start using internet companies for all their everyday needs. But it’s hard to change people’s behavior overnight. Change, for most people, takes time.

And in time, it did change. With the release of the iPhone in 2007 (six years after the dot com bubble burst), everyone suddenly had access to the web everywhere they went.

Fast forward to today, 21 years later, and it’s hard to remember a time we weren’t connected.

Imagine working today without internet access… driving to a place for the first time without turn-by-turn instructions and live traffic updates… or just finding the best pizza in a new town.

We rely on the internet for almost every part of our lives.

Is Blockchain Headed for the Same Fate?

In 1999, two years before the dot com bubble burst, people were quitting their jobs to day trade…

According to a 1999 Time Magazine report:

“By some estimates, the number of folks who have quit their job to trade full time at day-trading firms is about 5,000 — a relative pittance. But add in those who trade online at home or between meetings at the office, and you may have as many as 5 million. Technology makes it possible; the bull market makes it irresistible.”

Just look at some recent stories:

There are numerous other similarities that are best outlined in Andrew Smith’s 2012 book Totally Wired, which outlines the causes of the dot com bubble:

We only have to look at CB Insights’ most recent report about global blockchain funding to see how investors are mirroring past dot com investors’ behavior: 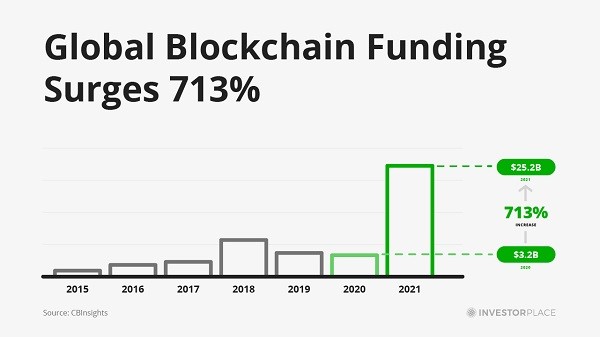 Funding for Non-Fungible Tokens (which use blockchain technology) is off the charts. While it’s certainly possible that 2022 could see even more funding, I’m willing to bet my right leg that it won’t be anything close to the growth experienced in 2021. 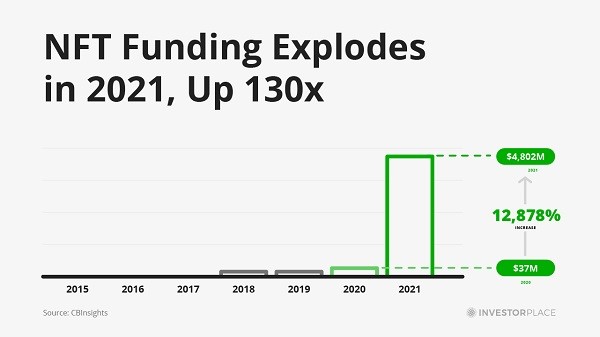 So what does this all mean?

Just like the dot com bubble, there will likely be some big losers in the blockchain industry. Statistically speaking, according to the Small Business Administration, 90% of all startups fail.

This is especially true with later-stage private blockchain companies that are already valued in the tens of billions of dollars.

For investors to make money investing in these late stages, these highly valued companies would have to go public or get acquired for significantly more than they are already valued.

That doesn’t mean there isn’t opportunity in the blockchain space.

Amazon (NASDAQ:AMZN) launched in 1994 and survived the dot com bubble. Not only did it survive, but it’s also a household name. Nearly three-quarters of U.S. customers start their product searches on Amazon.

Amazon hit the public markets in 1997, four years before the dot com bubble burst. If you bought in those early days, today you would be sitting on a 180,665% gain. That’s incredible, life-changing money…

Despite the record amounts of funding and a lot of hype, there are still some very attractive private blockchain companies in early stages.

So while I’m cautious… I certainly won’t be sitting on the sidelines. I’ll just be a little pickier about where I put my money.

In fact, I have a number of private opportunities on my radar right now…